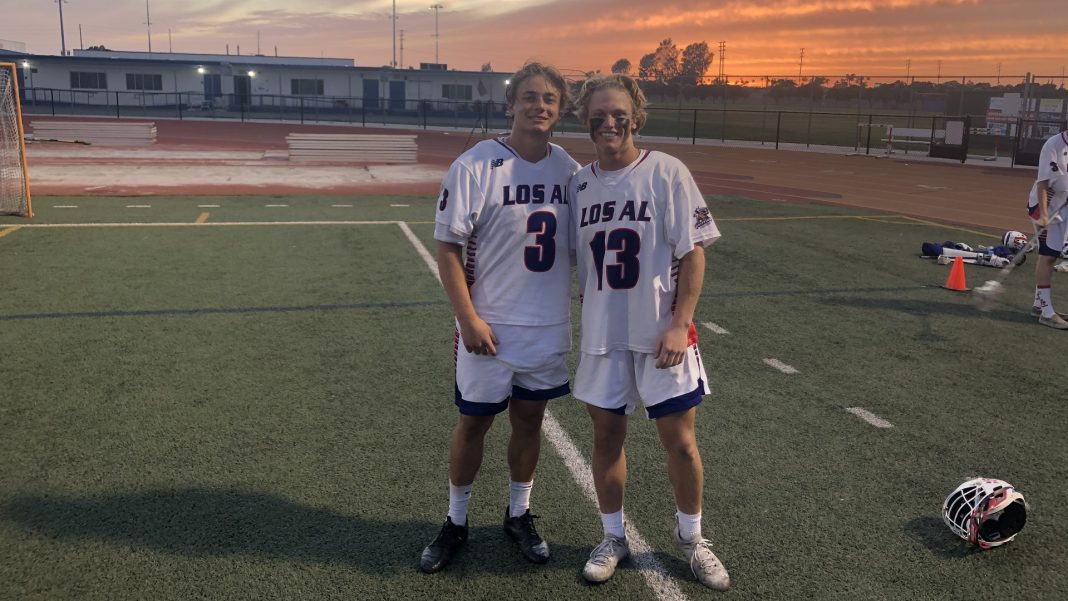 The Griffins (9-5), the second place team from the Sunset League, advance the the second round where they will play at Westlake (17-1) on Friday with a time to be determined. The Warriors had a first round bye.

Ten Griffins including Glowacki and Shean found the back of the net. Sean Park, Ben Posner and Matt Carressi each had two goals. Drew Anderson, Ryder Buell, Connor Engel and Jack Hunter each chipped in one goal while Trevor Partlow made six saves.

The Griffins never trailed in the game, but couldn’t pull away until the second half, as they lead 3-0 at the 8:29 mark of the first quarter. The Mustangs didn’t get on the board until two minutes after when Sebastian Hager scored, followed by a goal Austin Hicks 90 seconds later, making the score 3-2.

With Los Alamitos leading 4-3 toward the end of the quarter, it scored off of a buzzer beater courtesy of Posner, as his team led 5-3. Each time Trabuco Hills got closer to the Griffins, they found a way to extend the lead whenever they could.

Los Alamitos led 8-5 at one point, but the Mustangs scored two straight goals with one coming Hager and Hicks, cutting the deficit down to 8-7 at the one minute mark. Trabuco Hills almost got the equalizer as it forced a turnover and scored a goal in the waning seconds, but the goal came a split second after the clock hit zero.

The rest of the way was all Griffins, as they held the Mustangs scoreless in the third quarter. As well as that, Los Alamitos got three of its four goals in the quarter scored courtesy of Glowaki, who had the last three goals of the quarter for his team.

Trabuco Hills didn’t register its first goal of the second half until the 3:57 mark, but prior to that goal, the Griffins had a commanding lead of 16-7. Eventually, when the clock hit zeroes, the Los Alamitos players stormed the field, knowing their playoff drought was over.

“The second half, we did the same thing we did all year, we just started playing hero ball. Hopefully we can stick to the gameplan in the future,” Mustangs coach Eric Bassett said.

Hager led the Mustangs in scoring with four goals while Hicks added three goals. Ryder Roth and Jodan Venz each chipped in one goal for Trabuco Hills, which got five saves from Michael Salvanera.

Bassett was proud of his team, which one has three seniors on it, on how it got better as the season progressed. The Mustangs this year mainly started freshmen and sophomores.

“I thought they [Los Alamitos] were consistent the whole way, I think it was us falling off in the second half. We matched them blow for blow in the first half, but in the second half, we couldn’t keep up,” Bassett said.

The Griffins travel to Westlake Village to play Westlake on Friday with a time to be determined. The Warriors’ lone loss was to Loyola in a 14-5 non league game on March 30.

“We got to come out swinging again, just play Los Al ball, play our style and I think it’ll go in our favor,” Cunniffe said.