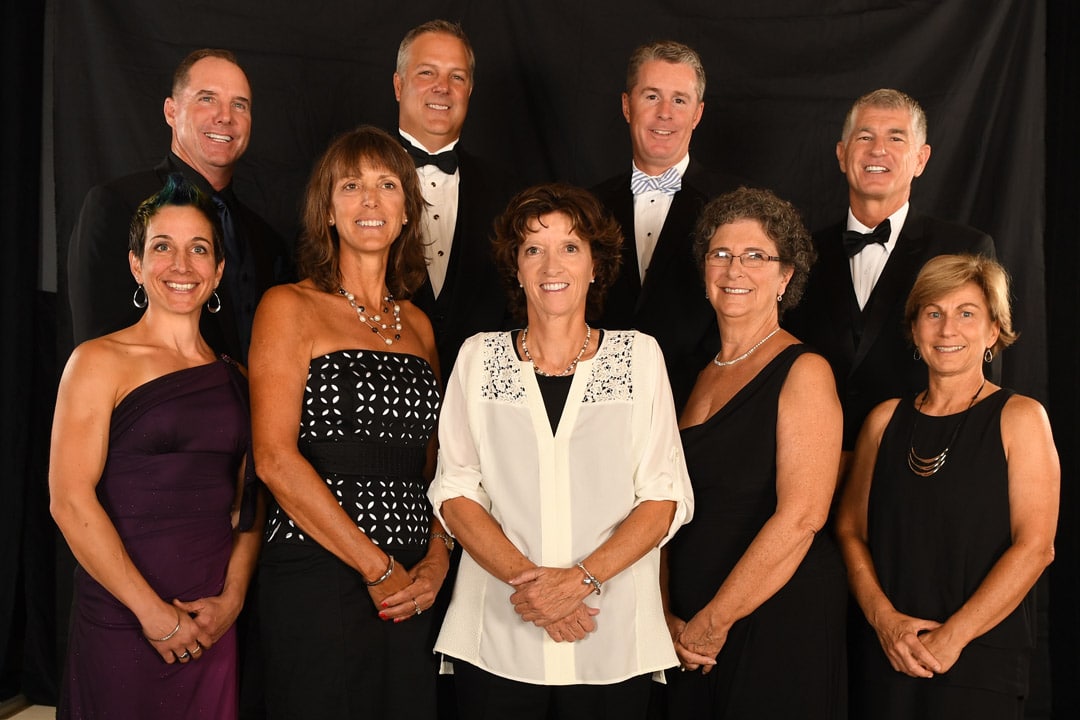 St. Margaret’s coach and Victory Lacrosse Program Director Glen Mile’s was one of nine inductees welcomed to the National Lacrosse Hall of Fame on Saturday evening.  Miles was a three-time All-American midfielder at the United States Naval Academy, earning first team honors in 1986, and second team honors in 1984 and 1985. He was also selected as the USILA’s national midfielder of the year in 1986. Miles finished his Navy career with 140 points scored (65g-75a), ranking 13th on the Mids’ all-time list. Miles was a member of the world champion 1990 U.S. Men’s National Team, and served as an alternate for the 1986 U.S. Team.

“His development was very quick,” Meade said. “Glen is a very complete athlete and an outstanding lacrosse player. He had the tools. He was very fast, very dynamic and very explosive. But I think his greatest attribute was his intangible knowledge of just how to play. In 1986, Glen was the best player on the field in every game, and that was obviously reflected in his selection as the midfielder of the year.”

The full press release from US Lacrosse is presented below.  Photo credit: John Strohsacker/US Lacrosse.

As a college senior at the University of Massachusetts in 1982, Anderson was team captain and team MVP as UMass captured the inaugural NCAA women’s national championship. She was also the team’s leading scorer that season. Anderson then played on the U.S. World Cup team in both 1986 and 1989. She finished as the tournament’s leading scorer in the 1986 World Cup and scored the game-winning goal for Team USA in the 1989 championship game.

Hall of Famer Josie Harper, Anderson’s coach with Team USA, served as her presenter. “Margie was an incredible athlete and has that ability to look at the game and know what has to be done to win the game,” Harper said. “Hall of Famers are game-changers and Margie was a game-changer on the two World Cup teams. When you’re playing at that level and can be cited as a game-changer, then you’re something pretty special. In the toughest of situations, she stepped up.”

Connelly enjoyed an outstanding four-year career at Penn State University, where she earned first team All-America honors as a defender in 1995 and 1996 and second team honors in 1994. Connelly helped lead the Lions to the NCAA postseason three times, including the national semifinals in 1995. She then became a fixture as a 10-year member of the U.S. National Team Program, playing on the U.S. World Cup Team in 1997, 2001 and 2005 and helping to capture two gold medals. Connelly was selected to the All-World Team as a defender in 2005.

Hall of Famer Candace Finn Rocha, who coached Connelly, served as her presenter.

“I would not want to play against Joanne. She was a defender and she was pesky,” Finn Rocha said. “She was very good at reading the game and very good at reading her opponent, and that’s what made her such a good defensive player. She is a real competitor and she hated to lose. When you have a defensive player on you with that determination and focus, you know it’s going to be tough to beat her.”

Dayton was a two-time first team All-American as a midfielder at Longwood College and the school’s Female Athlete of the Year in 1981. She then spent 10 years as a member of the U.S. National Team Program. Dayton was a midfielder on the 1986 U.S. World Cup Team and was also selected to the U.S. Olympic exhibition team in 1984. She served as an assistant coach at the University of Virginia from 1985-1993 and helped lead the Cavaliers to two NCAA championships.

Hall of Famer Jane Miller, who coached Dayton at Longwood and later hired her as an assistant coach at Virginia, was her presenter.

“Julie was the engine that drove our team at Longwood. She is all about people and about relationships, and that made her a great team member and a great player,” Miller said.  “She had the heart of a lion, and the intensity that she played with was contagious. Her spirit inspired the people that she played with, and then, those that she coached.”

Miles was a three-time All-American midfielder at the United States Naval Academy, earning first team honors in 1986, and second team honors in 1984 and 1985. He was also selected as the USILA’s national midfielder of the year in 1986. Miles finished his Navy career with 140 points scored (65g-75a), ranking 13th on the Mids’ all-time list. Miles was a member of the world champion 1990 U.S. Men’s National Team, and served as an alternate for the 1986 U.S. Team.

Richie Meade, an assistant coach at Navy during Miles’ career, served as his presenter.

“His development was very quick,” Meade said. “Glen is a very complete athlete and an outstanding lacrosse player. He had the tools. He was very fast, very dynamic and very explosive. But I think his greatest attribute was his intangible knowledge of just how to play. In 1986, Glen was the best player on the field in every game, and that was obviously reflected in his selection as the midfielder of the year.”

Morrill was a two-time collegiate All-American on attack at Johns Hopkins University, earning first team honors in 1988 and third team honors in 1987. He helped to lead the Blue Jays to the national championship in both 1985 and 1987, and finished as the team’s leading scorer in both 1987 and 1988. Morrill also won two world championships as a member of Team USA in 1990 and 1994, and he was selected to the All-World Team as an attackman in 1994.

Morrill joins his grandfather, Kelso, and father, Bill, in the National Lacrosse Hall of Fame, becoming the first family to be represented by three generations.

“Michael was just a great all-around player, the type of player who made everybody else around him better,” Kelso said. “He was so unselfish and so smart. He had such a high lax I.Q. that the ball was always in the right spot at the right time. It’s not a surprise that he’s been on so many championship teams.”

Shek enjoyed an All-American career as a midfielder at Towson University, earning first team honors in 1991 and second team accolades in 1990. He was also selected as the national midfielder of the year 1991 while helping to lead Towson to a national runner-up finish in the NCAA Tournament. Shek won two world championships as a member of Team USA, capturing gold in 1994 and 1998. He also enjoyed a lengthy professional career, which included seven seasons as an indoor player for the Philadelphia Wings and Baltimore Thunder, and four seasons in the outdoor game with the Washington Power and Baltimore Bayhawks.

Hall of Famer Brian Voelker, who competed against Shek in college and later joined him as a teammate in the professional ranks and on the U.S. Men’s National Team, served as his presenter.

“Rob was a beast. He was big, strong, fast and could shoot like crazy with both hands,” Voelker said. “The other thing that stands out is just how hard Rob worked at his game. There are a lot of guys with talent that aren’t in the Hall of Fame. He made himself the Hall of Fame guy that he is. He worked really hard to accomplish the things that he did in the lacrosse world.”

Tucker began his career at Towson University and earned honorable mention All-America honors as a midfielder in 1981 and 1982, before transferring to Johns Hopkins University and earning honorable mention status again in 1984 as the Blue Jays won the NCAA title. Tucker then added three world championships to his resume as a member of Team USA in 1986, 1990 and 1994. He was named to the All-World Team in both 1986 and 1990. As a professional, Tucker played seven indoor seasons with the Philadelphia Wings, winning championships in 1989 and 1990, and being named league MVP in 1987 and 1989.

Hall of Fame member Vinny Sombrotto, a teammate of Tucker’s on the U.S. Men’s National Teams, served as his presenter.

“John was a chameleon. If he needed to be a dodger, he was a dodger. If he had to be a shooter, he was a shooter. If he had to be a passer, he was a passer. Whatever was necessary, he did,” Sombrotto said. “His love for the game is what put him over the top. Hall of Fame players make players around them better, and he was definitely able to do that. Playing with or against John Tucker, you knew you were going to get 110% all the time. He had a will to win”

A native of Philadelphia, Basner officiated at the highest levels of the game during a 21-year umpiring career. Basner officiated three NCAA national championship games, five national semifinal games, and numerous Pennsylvania high school state finals. She also officiated at four international events, including the 1993 World Cup final in Scotland. She served on the US Lacrosse Rules Committee for over 10 years, and also served as the NCAA’s coordinator of officials for championships from 2006-2014.

“She is being recognized as an official, but my mom’s contributions to the sport are vast and varied,” Kendra said. “She has devoted so much time and energy into advancing the game, and would volunteer anytime it was needed. It was always because she loved the sport. Her goal was always to make the game better.”

Inducted as a truly great contributor, Doyle following her playing career, which included four seasons at West Chester and a spot on the U.S. World Cup Team in 1982, by serving as a coach, administrator and game ambassador, developing girls’ and women’s at all levels for over 20 years. She organized the first girls’ lacrosse state tournament for the Pennsylvania Keystone Games, and served as co-director from 1997-2000. Doyle also developed and managed the first summer league for Philadelphia area high school girls.

Hall of Fame member Val Walchak, a mentor and colleague for Doyle, served as her presenter.

“I think Michele is most proud of the passion that she has always had for this game,” Walchak said. “And when you have committed 42 years of your life to something, which is amazing, there has to be a passion. And she still exudes that passion. She takes something and always makes it better.”

The National Lacrosse Hall of Fame, a program of US Lacrosse, was established in 1957 to honor men and women who by their deeds as players, coaches, officials and/or contributors, and by the example of their lives, personify the great contribution of lacrosse to our way of life. Over 400 lacrosse greats are honored in the National Lacrosse Hall of Fame, which is located with the Lacrosse Museum at US Lacrosse Headquarters in Sparks, Maryland.