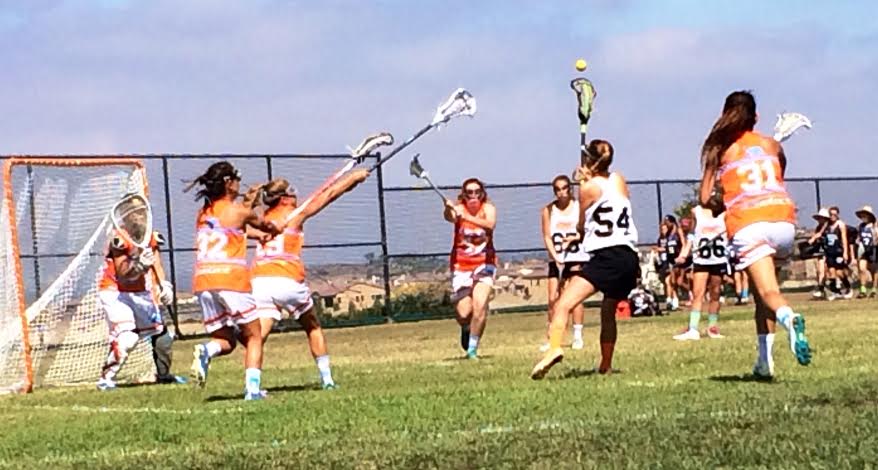 The girls’ summer lacrosse scheduled continued last week with teams travelling to  the West Championships in San Jose and the Pacific Lacrosse Festival in San Diego.  Both events were testing grounds for the youngsters of Orange County girls’ lacrosse.  Victory Lacrosse and Generation Next National Team sent teams to the U15 US Lacrosse West Championships.  Comprised of  7th through 9th grade girls, Gen Next and Victory earned identical 2-3 records.

About 60 girls teams from seven states showed up in San Jose for the second US Lacrosse West Championships.  The enthusiastic response from the girls’ lacrosse community and the quality of play on the field demonstrated that girls’ lacrosse has a bright future in the west and and that our local players are rapidly catching up to their eastern counterparts.   Orange County was proud be represented by two forces last weekend: a motley crew of OC’s best with Gen Next, and the gracious ladies of Victory Lacrosse.

Although it was a challenging weekend for both teams, Gen Next and Victory came away with generally good records and new experience playing teams they had never played before.  For Gen Next, rising star Brooke Williams (little sister of First Team honor Shea O’Donnell) gave her insight on the tournament.

Regarding the beginning of the tournament, Brooke said, “I think we were trying to force it too much and we weren’t using our offensive plays.  Also, we were just getting beat to the ball a lot.  But the second game was better than the first.”  As the tournament progressed, Brooke came away with good things to say: “We had a lot of fun.  And I really liked how well we played for the short time we have been together.  I feel like a lot of us improved significantly during the tournament.  Overall it was a great experience.”  Brooke is currently in junior high, but will bring her good attitude and matching stick skills with her to OC high school lacrosse soon enough.

Orange County was also in San Diego that same weekend, at the Pacific Lacrosse Festival.  The 5th annual Festival has become a must-attend event for boys’ and girls’ teams.   Team OC and Victory Lacrosse sent teams to compete against clubs from all over the nation.

For Team OC, the weekend in San Diego was unlucky.  Both the 2018 and 19/20/21 teams were missing goalies, which was a key factor to both teams’ 1-4 records .   Team OC played clubs from all around California, like the San Diego Pacific Falcons, and  Colorado.  The 2018 teams single win was against 3d Select Colorado, which may have been one of the most exciting of the tournament.  Team OC 2018 led the game starting off, were caught up to by the vengeful Colorado team, and had to fight till the end to secure a well-deserved win.

Team OC’s youngest team, the 19/20/21 grad years, struggled to match the tough competition at the festival.  Head Coach Melissa Hastie explained that they could not manage to “work our systems,” but was proud that her team was still improving.  Most notable of the 19/20/21 team was solid teamwork, especially on the defensive end.

Victory Lacrosse had an outstanding weekend, going undefeated with a 5-0 record.  The Victory girls used their  speed and well-organized play to distance themselves from the pack.  The U13 team defeated 3d Select Colorado (2-13), 3d Select Socal U13 AAA (5-4), Tomahawks (11-7), Mad Dog lacrosse (11-7), and Desert Heat U13 Orange (2-9).  As always, the Victory Lacrosse teamwork and sportsmanship was on display.

What all Orange County teams can take away from participating in these two California-based, national tournaments are bounds of bonding with teammates and eye-opening exposure to lacrosse from around the country.  Starting as young as the Team OC and Victory youth, players rack up prestigious lacrosse repertoires early, and foster growth that will go on for a lifetime.