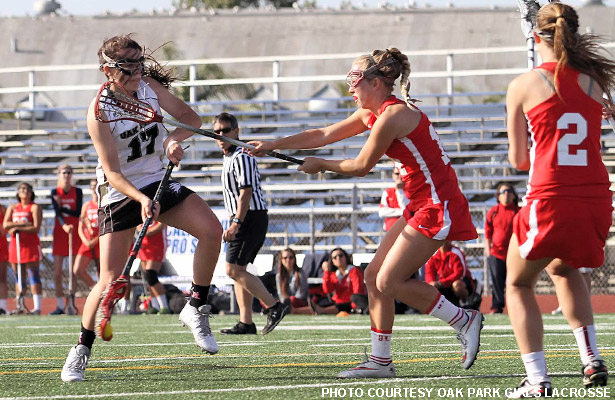 The 2016 high school lacrosse season is right around the corner, and MaxLaxLA is ready to open the discussion of the top teams in the area with our Girls Preseason Top 10.

After digging into last year’s rosters, records and stats, we believe this is a pretty fair look at how the top teams stack up entering official practices. Of course, the teams will decide it on the field between now and May, but from our vantage point, these are the teams to watch.

Agree? Disagree? We are open to the conversation and encourage all coaches and teams to send us information, stats and story tips. Our goal is to promote the girls game and continue to provide the best information possible in support of lacrosse in the LA area.

1. Oak Park (17-5)
On paper it appears that all roads to the US Lacrosse Southern Section North Division championship go through Oak Park. The Eagles have reached the bracket finals three years running, losing the last two by a single goal each. Eleven starters return from last year’s squad, and there is an abundance of fire power, led by Army-committed Morgan Shorts (82 goals, 19 assists), Julia Gilliam (63g, 30a) and Ania Brown (60g, 19a). The Eagles also have a senior-laden defense, anchored by Lauren Welin, with St. Mary’s commit Meggie Sheehan in goal. This is the last year for this group of seniors. Can they stay focused and finally win the title that has eluded them?

2. Chaminade (18-4)
Last year’s regular-season runner-up to Oak Park in the LA North Conference won 18 games and returns a veteran group, led by offensive standout Emma Dawson. Can the Eagles break through this year and topple the top teams?

3. Redondo Union (18-2)
Redondo won the US Lacrosse LA championship last year, beating Oak park 13-12, and pushed Foothill to the final whistle in the Southern Section championship game. The Sea Hawks return a stout defense, led by senior Allie Vorndran, but they will need to reload on offense to replace Maddie Farmer, who graduated and now plays at Colorado Mesa, and Allison Shamir (43g, 18a), who moved to Farmingdale, N.Y. This task will fall to seniors Samantha Marcon and Hailey Vorndran.

4. Agoura (9-8)
The Chargers won back-to-back North Division titles in 2013 and 2014, but they were hit hard by graduation from those teams and struggled to find their form last season. This year, however, they return a powerful offense, led by junior Lauren Harrison (81g, 12a) and senior Kinta Schott (26g, 3a). With all but one player back from last season, Agoura will look to get back into the mix for the North title.

5. Westlake (18-3)
The Warriors return everyone but their leading scorer and their coach from last year’s roster, which was made up entirely of underclassman. But losing coach Brendan Edgerton and his daughter, senior Drexel signee Arden Edgerton (100g), who moved to Massachusetts, leaves huge holes to be filled. Kennon Broadhurst, an assistant coach last year, appears to have filled the head coaching vacancy, according to the team’s website. The task of filling the scoring void will fall to senior Lexi Padilla (47g, 11a), senior Jordan Kuchta (32g, 11a) and junior Sami Fairweather (30G, 7A). The question for the Warriors is can they keep up with the top teams?

6. Palos Verdes (6-9)
The Sea Kings reached the quarterfinals in the North bracket last spring. But they struggled to produce enough offense (9 goals per game) to keep up with the high-powered teams. This year should see an improvement on both sides of the ball.

7. Mira Costa (10-9)
Costa reached the semifinals of the North playoffs last spring and returns a large portion of its starting lineup. Look for the Mustangs to have an improved offense and a tough defensive unit.

8. Glendale (12-6)
An ever improving team that looks to continue its ascent in the North. The Nitros, who reached the second round of the playoffs spring, return a number of starters and will surprise a few teams this year with their gritty play.

9. Newbury Park (13-5)
After reaching the second round of the North bracket last year, the Panthers return a strong core of experienced players, led by junior Sydney Bumbarger and senior Katie Owens.

10. Peninsula (6-7)
The Panthers reached the playoffs last year and this year will lean on a balanced attack from several returning players in senior Shannon Nakamura (24g, 7a), sophomore Zoe Puccia (23g,7a), and junior Megan Webb (21g, 7a).

Editor’s Note: MaxLax is always looking for accurate and updated stats on players and teams. Send information to MaxLaxLA.girls@gmail.com. Thank you in advance for you help.