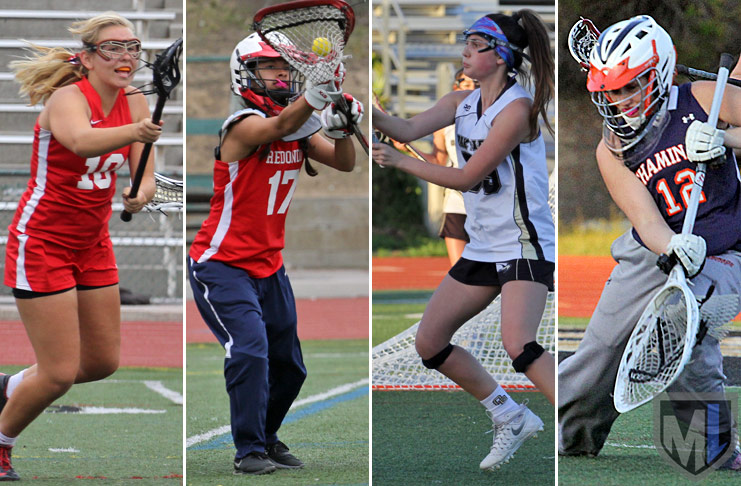 We conclude our look at girls lacrosse players to watch in the 2017 season with the athletes who team up to deny opposing offenses — defenders and goalies.

Eleven coaches responded to our request for recommendations for these lists, so there no doubt are plenty of other defenders and goalies worth paying attention to. But these are the ones we know about.

Players are listed alphabetically, with the comments provided by their coaches.

Jordan Perry, senior, Thacher: Jordan is fast and reads the game extremely well. She will anchor our defense this year.

Harper Wayne, junior, Oak Park: (pictured, second from right) One of two returning starters. Harper will anchor the Eagles Defense. She has a very high lax IQ and plays a strong and physical game.

Rachel Goodside, senior, Chaminade: (pictured, top right) A returning first-team All-Region goalie, Goodside recorded 19 saves in the first round of the playoffs (with the flu). She was instrumental to the Eagles’ success in 2016.

Melanie Paiz, senior, Redondo: She will be starting for the third year and has a won-lost record of 33-5 in goal the last two years. She has allowed an average of 6.8 goals per game in two seasons.

Briana Williams, senior, Dunn School: Briana is the glue to our defense. Although she is not physically playing defense on the field, she supports the entire unit in goal. She is vocal and knows how to get behind any shots she faces.