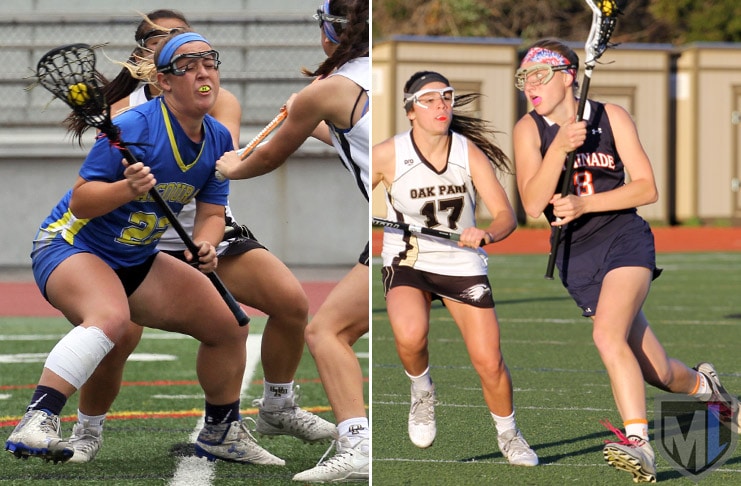 In advance of the 2017 season, MaxLaxLA emailed all area coaches looking for names of players to watch in high school girls lacrosse this season. Today we start our position-by-position look at the players recommended by coaches with attackers.

Agoura’s Lauren Harrison (above, left) leads the way. Now a senior, Harrison has been among the most prolific goal-scorers in the nation over the past few seasons. She helped the Chargers win the US Lacrosse Southern Section North title in 2014. Agoura has gone 41-13 in her three seasons.

Here are some attackers to watch this season (listed alphabetically):

A returning US Lacrosse All-American, Harrison is committed to NCAA D-I Mount St. Mary’s. She has scored 293 goals in the last three years. Based on MaxPreps, only one player in the nation has scored more (296) in that time period.

“Lourdes is always cool, calm, and collected on the field. She was a part of the national team last year and has an efficient and controlled style to her play. She will be leading the team as a captain this year.” — Coach Cheyenne Cockrell.

“Lightning fast with a killer shot; great lax instincts make her another one of the rising stars in LA.” — Coach Tom Borgia.

Scored three goals and had seven assists on last year’s senior-dominated LA-area champion. “Kathy is tall, powerful and strong. She will torment opposing defenders with her size and speed.” — Coach Dru Gilliam.

Mackel (pictured, above right) led the Eagles with 63 goals as a sophomore. “A sharp-shooter who is a two-time first-team US Lacrosse All-Region selection.” — Coach Scott Cohen.

“Bea is a scoring threat with strong stick skills. She will be the anchor of our offense this year. She also can play midfield.” — Coach Kara Hooper.

Had 17 goals and three assists last season. “Really improved her shot in the offseason and will be looked upon to be one of the top scorers for Redondo this year.” — Coach Tom Borgia.