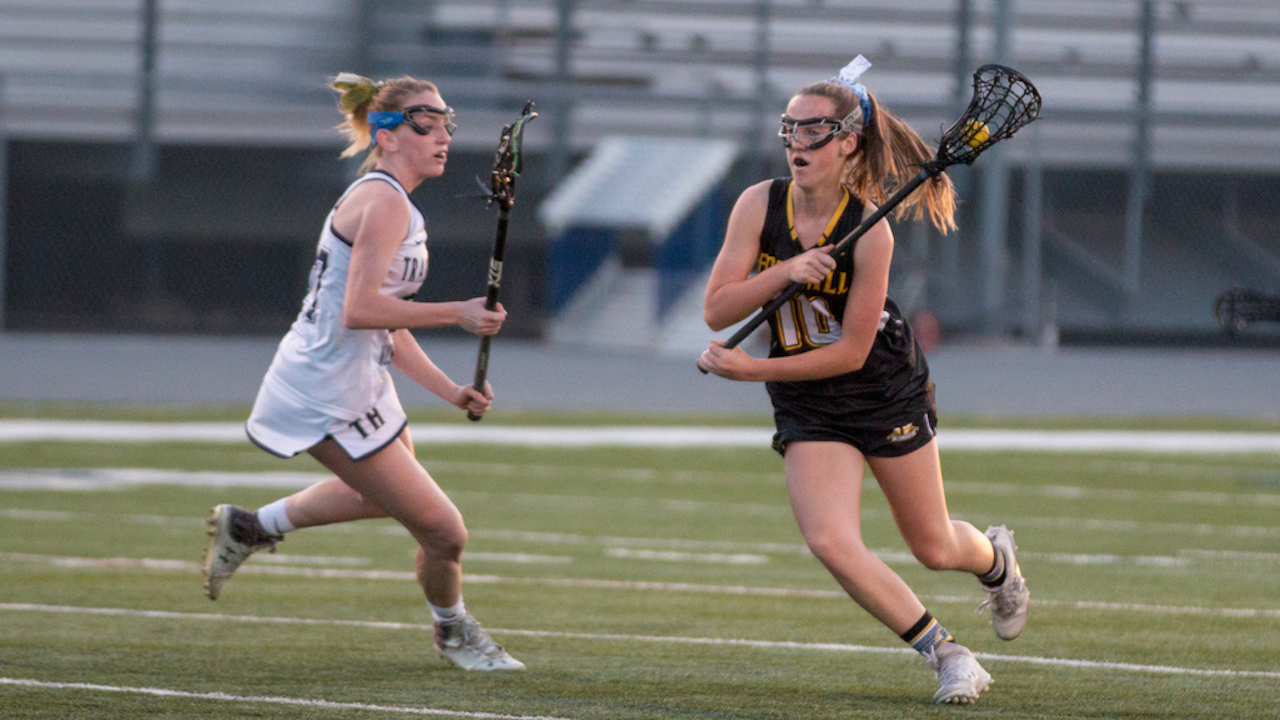 There is no clear favorite this year.  Each of the sixteen teams has been defeated at least once by an OC team.  No. 1 Foothill lost to No.2 St. Margaret’s who lost to No. 4 Santa Margarita who lost to No. 5 Trabuco Hills who lost to No. 7 San Clemente and on an on it goes.  Let’s take a look at the first round matchups.

The Mustangs (10-6), the second place team from the Century-Empire League, are making their first playoff appearance since 2013.  Typical for a 16 v. 1 game, they face a daunting challenge. Foothill (14-1) is looking to win their first county and section championship since 2015.

Players to watch for – Junior Ashley Stokes will look to get back on track after failing to score against St. Margaret’s. Look for Stokes, who leads the Knights in goals with 65, to also get her teammates such as Brooke Williams, Peyton Puma and Ava Brand involved. Yorba Linda is led by Sophia Kallah who leads the team in goals with 27 while Alexa Rome is second in goals with 23. Cierra Taylor and Lily Amidon have each scored 20 goals for the Mustangs, who have gotten 161 saves from Sammy Baloch.

This will mark the second meeting between the two teams this season.  The Tartans (11-3) beat the Sharks (12-6) 19-10. In a season of firsts for the program, the Sharks continue to symbolize the rise of lacrosse the Inland Empire.  The Riverside County team won the first-ever Big VIII league championship and are making their first-ever playoff appearance.

Players to watch for – The St.Margaret’s offense is led by Maddie Barkate, Jordan Miles and Niki Miles, who have score 47, 46 and 32 goals, respectively. Olivia Young has 79 saves in the cage for the Tartans. For Santiago, Riley Wilson leads the team in goals with 40 followed by Claire Knight and Kaylee Bravo, who have 31 and 30 goals. Peyton Nuse and Katie Burr split time between the pipes for the Sharks with  75 and 59 saves, respectively.

Players to watch for – The Mater Dei offense is led by their senior trio of Peyton Smith (48 goals), Gianna Danese (47 goals) and Tess Keiser (32 goals). Jamie Ko, Lauren Friedman and Chloe Seybold have also contributed to the Monarchs’ offense. Lily Molkara leads the Monarchs in saves with 76. For San Juan Hills, Lucy Hodge leads the team in goals with 66 while Riley Goodfellow and Jacy Fischbeck have 39 and 23 goals. Kimora Farry has 110 saves for the Stallions.

Santa Margarita (15-3), the Trinity League champion, faces Beckman (10-6),  the Pacific Coast League co-champion. The Eagles defeated both no. 2 St. Margaret’s and no. 3 Mater Dei but also lost to Trabuco Hills earlier in the season.  Their no. 4 seed, may have them playing with a little extra motivation and something to prove.

Players to watch for – Katelyn Murphy leads Santa Margarita in goals with 126 followed by Molly Jacobson, who has 49. Brogan Webster has 115 saves for the Eagles. Beckman, which spilt the league title with University, is led by Julia Patrick, who leads the team in goals with 53. Carly Tobias, who missed most of the season with a foot injury before coming back last Thursday, has 21 goals while Abby Williams has 20 goals. Nina Kalhouri leads the team in saves with 102.

Trabuco Hills (14-4), the South Coast League, plays Corona Del Mar (6-10), the third place team from the Sunset League. The two teams met earlier in the season when the Mustangs won 16-7.

Trabuco Hills is led by Hennessey Evans, who leads the team in goals with 108. Look for Evans to get Ieneke Jimenez (66 goals) involved as well. CdM is led by Caroline Brewster, who has 34 goals. Katie Langley anchors the Sea Queens’ defense with 115 saves.

Aliso Niguel (11-4), the second place team from the South Coast League, plays University (13-3), the Pacific Coast League’s co-champion. This’ll be the second straight year the two teams have met in the playoffs.

Players to watch for – Taylor Wedlock leads Aliso Niguel’s offense with 100 goals while Kendall Decker and Sydney Gonzales have 34 and 27 goals. Olivia Kilroy paces the Wolverines’ defense with 102 saves. Mya Wang leads University in goals with 94 while Grace Colunga has 38. A player who has emerged for the Trojans’ offense is Kaylor Chott, who has 25 goals. Grace Caceros anchors the Trojans’ defense with 94 saves and has emerged as one of their active interceptors.

San Clemente (10-5), the second place team from the South Coast League, plays El Dorado (15-3), the Century-Empire League champion. The Tritons’ enter the tournament with some momentum having won their last three games, all of which were playoff teams (Newport Harbor, San Juan Hills, and Trabuco Hills). El Dorado hopes to recover from a recent 19-9 loss to Aliso Niguel and pull of the upset.

Players to watch for – Delaney Iles leads San Clemente in goals with 40 goals while Stolie Erickson is second with 35. Brookelynn Hodgin and Kennedy Kingsmill split time between the cage, as they have 48 and 22 saves for the Tritons’ defense, which mainly plays a zone. Britney Robles and Rachel Davis lead El Dorado’s offense with 70 and 67 goals. Lorelei Coleman has 92 saves as the Golden Hawks’ goalie.

This will mark the second meeting between the Sunset League rivals. The Sailors (9-8) defeated the Griffins (9-6) 15-6 the first time en route to the league championship. Just like most 8 vs. 9 matchups anything can happen in this game.

Players to watch for – Delaney Knipp, Mariana Miller and Joelle Rothbard lead the Sailors in goals with 47, 41 and 39 goals. Willa Rath anchors the Newport Harbor defense with 132 saves. The Griffins are led by Riley Deutsch, who has 57 goals while Sydni Jenkins and Ana Canning have 27 and 26 goals. Madison Shean leads the Griffins with 94 goals.