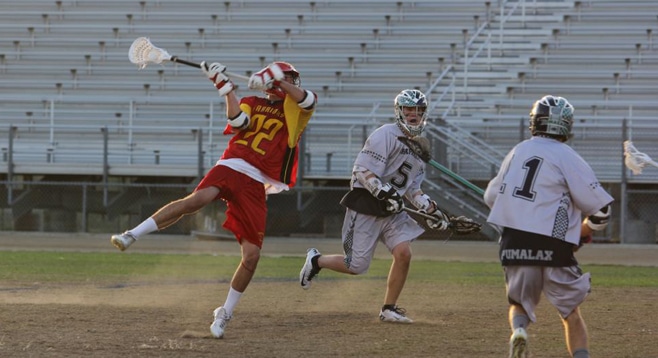 Led by six points from junior attackman Jake Giglio (5 goals, 1 assist), Woodbridge celebrated their first win of the season on Tuesday, a 13-10 victory over Chaparral.

The first quarter was dominated by Chaparral who jumped out to a 3-1 lead. Some outstanding goalkeeping by Dom Budetti kept the game close for Woodbridge. Giglio and senior captain Ethan Lynch (1 assist) teamed up to give the offense a spark early in the second quarter in a two-man down situation. Lynch stripped the Chaparral goalie of the ball, and Giglio, ever the opportunist, picked up the groundball and buried the shot to make it 3-2. A pair of Ben Berkow (4 goals, 2 assists) gave the Warriors a 4-3 lead before Chaparral decided to tip the seesaw in their direction and tie the game. Aided by strong defensive play by seniors Ryan Francis, Sean Leavey, and Liam McCarty, and some nice saves by Budetti, Woodbridge lead 6-5 at the intermission. Berkow added his third goal of the game, and Giglio his second, to round out the first half Woodbridge scoring.

The game stayed tight through the third quarter with Sam Turner (1 goal) and Ben Robinson (2 goals and 1 assist) matching a pair of Chaparral goals to make it 8-7 after three. Giglio went on a tear in the final quarter, scoring the first three Woodbridge goals of the frame. Senior Joe Houston scored his first goal of the season and Berkow, with an assist from senior Alex Howard, scored the final goal of the night to reach the final tally of 13-10.

Woodbridge (1-2) hosts undefeated CIF newcomers Edison on Thursday. Next up for Chaparral (2-4), a home game against Marina on Friday.