Get To Know GW Mix 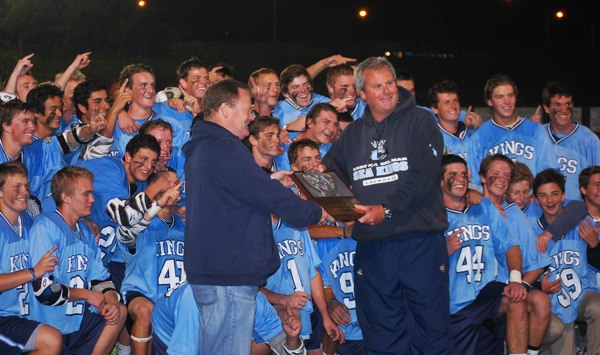 Coach Mix grew up in Baltimore, played at Gilman and the University of Pennsylvania. After graduating, he became an assistant coach and stayed on campus for five more years in that role. Coach became the head coach at Franklin & Marshall in 1987 and back at Penn in 1991. Since that time, he has been involved in establishing youth programs in Charlotte, North Carolina and here in Newport Beach, selecting US National Teams, serving as president and GM of the LA Riptide in the MLL (2006-2008), and coaching at Corona del Mar High School. He began volunteering as an assistant coach at CdM from 2007-2009 and took over as  head coach since 2010.  The Sea Kings have compiled a 90-13 record and claimed the 2011 Southern Section crown under Coach Mix’s watch.  Coach Mix took a few minutes with MaxLaxOC.com to share some thoughts on lacrosse, good music, and the movies.

Q: What style of play do you like to use?

A: Our style of play depends entirely upon the make-up of our team and the strengths & weaknesses of our opponent. Through all of it, we strive to be fundamentally sound.

Q: Do you like to give inspirational speeches to your players before the game?

A: It is very rare that I do, if at all. Our kids enjoy playing the games. They recognize there are not that many opportunities to compete and, as a result, tend to be pretty inspired on their own.

Q: Would you say you are quiet on the sidelines or do you speak up?

A: It depends entirely on the situation. I’m certainly not a screamer and I don’t believe in coaching our players through every single action on the lacrosse field. If our coaches are directing all of the action on game day, it would indicate to me we have not done a very good job of teaching in practice or that we don’t trust our players to do the right things. We have a lot of trust in our players and in the system we teach them.

Q: Tell us one thing about you about that most people don’t know.

A: If I did that, people would know.

Q: Did you have a pre game ritual as a player? what was it?

A: No, not really. As a goalie it was important to me to get a good night’s sleep and a good warm-up. I tried to know as much about the opponents’ shooting tendencies as I could at the time.

A: All of the great times with my teammates.

A: Having my CDM lacrosse family around me two years ago, helping me deal with the unexpected loss of my father.

Q: What is the best movie of all time?

A: I have really enjoyed quite a few at various times in my life. I know for sure it’s not Crooked Arrows.

Q: Give us a five song playlist for a training run

Q: What one piece of advice do you have for the young player looking forward to playing in high school

A: Take control of your athletic career. No one else has as much at stake.

Q: What one piece of advice do you have for the high school player hoping to play in college

A: Make sure you have a very good understanding of what playing lacrosse at a particular school, and at a particular level, really entails. Many young men who go off to play lacrosse in college, particularly those from pioneering or younger programs in California, are woefully underprepared for the challenging journey ahead.