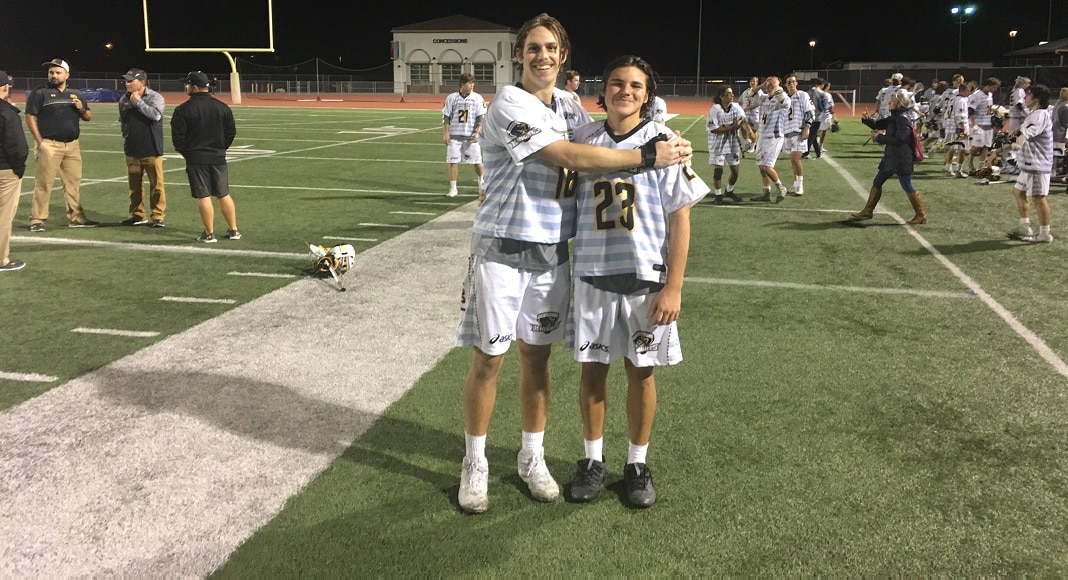 The No. 2 Foothill boys lacrosse team will be playing on Cinco De Mayo thanks in large part to an ocho from Ellis Geis on Thursday night. Geis scored eight goals to help the Knights pull away from the upset-minded No. 10 Servite Friars 16-11

The Knights had to put on their hard hats Thursday to get past a talented Servite team that did not seem to get the underdog memo.  The Friars gave Foothill everything they could handle in the first half and trailed only 7-6 at the intermission.

The third quarter belonged to Foothill, as it went ahead 12-7 at one point and led 12-8 at the end of the third quarter.  Even then, the Friars would not go away as the pulled back into striking distance of the Knights at 13-9, but three straight goals from the Knights helped put the game out of reach.

“Overall, the guys did share the ball well, we just didn’t shoot well in the first half. He [Geis] stepped it up. I loved that he had that backhand goal under pressure right in the first quarter. That was a big energy boost for us,” John Fox said.

“I give my hats off to my defense that played a lot tonight up, but you can’t win a game man down a large percentage of the time,” Servite coach Tom O’Leary said. “The seniors definitely leave behind a legacy for the guys that are coming up in terms of work ethic, it’s big shoes to fill.”

The Knights’ next opponent is one they haven’t seen, as they play Tesoro in the semifinals (4:45 on Saturday). Fox knows how good the Titans are and hopes to be prepared for them.

“It’s going to be exciting. Two great teams with big senior classes get to battle. They’re a really strong team with a lot of chemistry just like us. It’s going to be a great challenge for us,” Fox said.