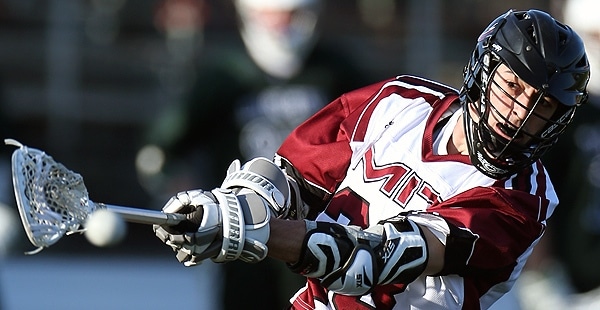 It was another good week for OC players at the next level. There were offensive awards, defensive awards, game winning goals, and first goals. Read on to get the details. If you think we overlooked someone, please submit your information to news at MaxLaxOC.com.

Dakota Rohlin (Great Oak), a midfielder at Jacksonville University, was named the Atlantic Sun Offensive Player of the Week. Rohlin who scored a hat trick against Duke earlier in the season is the second leading scorer on the Dolphins’ roster.

Garrett Parsons (Santa Margarita) and Johnny Gavin (La Costa Canyon via Santa Margarita) made their D1 debuts this past weekend when the Mercer University travelled to Colorado Springs to play the Air Force Academy. Adding to the local interest was big Matt McCall (Capo) playing LSM for Air Force. Gavin scored his first college goal when curled from X, collected a pass, and finished top corner from about 8 yards out with 4 seconds left in the half. Parsons got first D1 minutes at close D and McCall saw action at LSM. Air Force exploded early with a 10 goal first quarter and Mercer was never able to recover in the 20-6 game. Jacksonville hosts Mercer this weekend in a game that could decide the Atlantic Sun Conference championship.

As reported earlier in the week, goalie Michael Ortlieb (CdM) named the GoHolyCross.com Crusader of the Week, for competition from March 31-April 6. Ortlieb earned the win in goal as the men’s lacrosse team defeated Patriot League opponent Lafayette by a 10-5 score on April 5. Ortlieb was outstanding in net as he made 13 saves and allowed five goals for a .722 save percentage as the Crusaders defeated Lafayette. He has started in all 11 games this season and has made 93 saves.

Michael Traub (Aliso Niguel) scored the winning for the MIT Engineers in their 6-5 defeat of Salem State College.