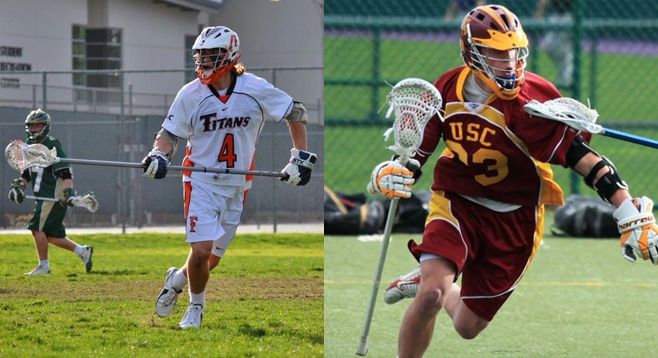 The Cal State Fullerton Titans have grown accustomed to beating fellow SLC DII opponents and are looking to move to the SLC DI soon. They played USC yesterday in a statement game to prove they belong.

Head Coach Mike Ansel was proud of his team’s ability to step up to the tougher competition “USC was our first Div 1 opponent this year and we were absolutely ready for the test.”

OC players from Foothill High School and Corona del Mar have come out of the woodwork to play for the Trojans now that new head coach Chris Boland has revitalized the program.

After the first quarter of sloppy play due to the heavy rain, the weather parted for a fair contest. Both teams took advantage of the clear skies and were able to run their normal packages on both sides of the ball. Sophomore Goalie Chris Lauraino (El Toro High school) came up with huge saves in the first half to keep momentum with the Titans. Only three of Lauraino’s six goals allowed were well placed; two due to EMO (extra man offense) opportunities and one to a rain tainted garbage goal. Chris lead the great play of the whole defense.

Fullerton controlled the ball for the majority of the game “Offensively we had the majority of the possession time which makes teams very uncomfortable. Jeff Lyon had several big goals at opportune times that gave us the momentum to pull away in the third quarter.”

The Titan’s now travel to Northern California to play St. Marys and San Jose State. The Titans are currently ranked 14th in the Nation for D2 MCLA and a strong showing in NorCal could get them the push they need to break the top 10.

Ansel added, “Starting 3-0 is one thing, but I feel like we have started 3-0 doing things the right way, which allows us to be ready for tougher tests down the road.”