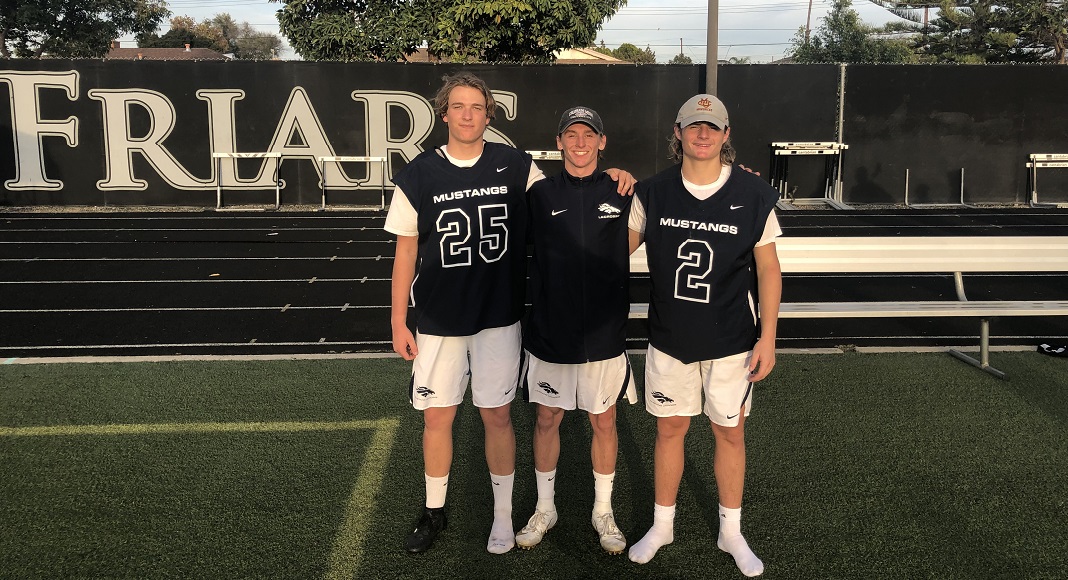 Holden Evans (pictured middle) led the Mustangs with nine goals and one assist while Jared Friesen (pictured left) had five goals and two assists. AJ Switzer (pictured right – 4g, 7a), Josh Burdett (2g) and Sebastian Hager (1g) also scored for the Mustangs, who got four saves from Cooper Gatlin and one save from Chris DeMarco.

“I was not expecting the game to be like this. These games are usually wars between us, and so I was ready for the worst and just because of our dominance at the faceoff, we just took all their steam out,” Mustangs coach Eric Bassett said.

From the opening faceoff, Trabuco Hills was in control, as they scored nine goals in the opening quarter and led 9-1 going into the second quarter. Collin Seedorf was strong at the faceoff position, as the Mustangs kept having the ball offensively and used precise passing to get goals.

11 out of 20 of the Mustangs’ goals were assisted. Bassett also included that the Mustangs are playing smarter after their 12-6 loss to Foothill.

“We finally are playing smart, we’re not just forcing the ball and I think it was a huge lesson we learned against Foothill,” Bassett said.

The Mustangs (10-1, 4-0) begin the second half of South Coast League play on Wednesday at Mission Viejo at 5:30 p.m. The Mustangs are halfway to repeating as league champions.

Servite was led by Brian Rusnak who had two goals while Sam Moore added one goal. Nate Kennedy made eight saves from the Friars while Ethan Yoon made two saves.

The Friars (4-5) are right back it, as they kick off Trinity League play tonight at JSerra at 5 p.m. They also play at Santa Margarita on Friday at 7 p.m.

The Friars came close to sharing the league title with the Eagles last year, having lost an 11-10 overtime game.