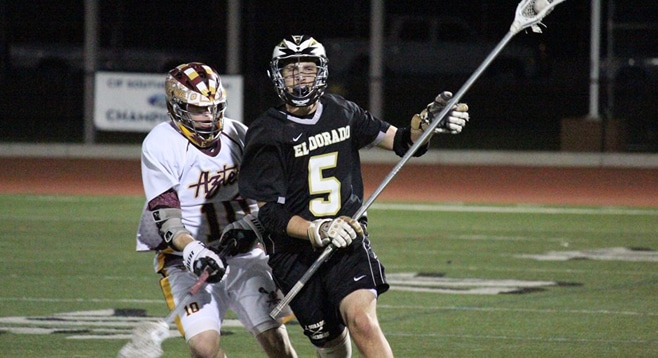 The past two Friday nights have proven to be painful ones for the El Dorado Boys team, as they suffered two last second losses by the same score of 9-8.

Last week was against Century League opponent Esperanza.  These are two neighboring schools, with many of the players having attended the same elementary and Jr Highs together.

Records mean nothing when these two battle for local bragging rights.  The game was back and forth with many lead changes as they entered the last minute of play tied at 8–8.   The Aztecs would score with six seconds remaining to secure the victory. This Friday the opponent was Temecula Valley and the game took on the same flow as the Esperanza game.

Both teams battled back and forth with the Golden Bears taking a 9–8 lead with a minute left.  El Dorado would take possession of the ball with 34 seconds remaining.  They frantically worked their offense and got off three quality shots.  The first bounced off the pipe.  The second bounced off the goalie and was recovered by the Golden Hawks.  The third shot would ricochet off the pipe as time expired.

El Dorado was led by freshman goalie Dylan Kammer who had 11 saves.  He was backed up by his close defense of Jake Wagner, Ryan Joblon and Logan Hubner.  Sophomore Wagner had two goals and two assists while Alec Simpson and Trevor Van Dissel had two goals each.  Andrew Hubner and Kenny Sommer rounded out the scoring with one each.  Dylan Davis contributed with winning 13 of 21 face-offs.

The good news for El Dorado is they don’t have another Friday night game for the next three weeks.  They face another neighborhood rival, Valencia, Tuesday at 4 PM at El Dorado.  They follow that up with a game at Tustin on Thursday.  Both are Century League games.