Fox sends Foothill to the Semi-Finals 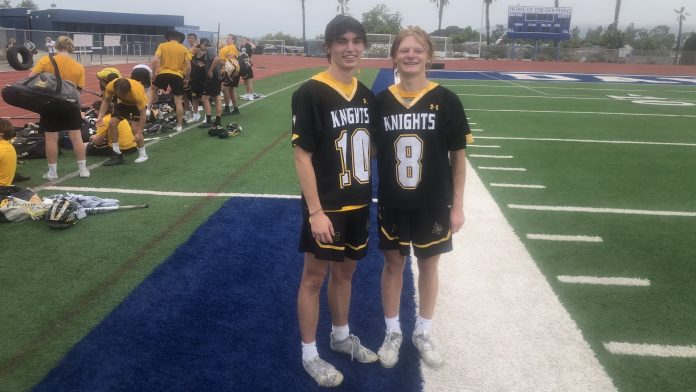 Luke Fox (pictured right) scored the game-winning goal in overtime to give Foothill a come from behind 9-8 win over Tesoro on Tuesday at Dana Hills High School in the CIF-SS Division 1 boys lacrosse quarterfinals.

The Knights (13-3) advance to the semifinals where they will play Mater Dei on Friday at 7:30 p.m. at Foothill. The Monarchs defeated Los Alamitos 11-6 in the other quarterfinal.

“We have a lot of heart in this team and I think that’s brought us this far. Second half our offense really clicked, we took a second to breathe at halftime, we noticed that we needed to get the possession that we needed and we needed to not force the ball,” Seiler said.

With the two teams tied at 6-6 entering the fourth quarter, neither team was able to find the back of the net for almost nine minutes as shots were being saved or possession kept getting turned over to the other team. The Titans broke the tie as Aidan Farris scored at the 3:02 mark to give them a 7-6 lead.

A minute and 42 seconds later, the Tesoro added another goal as Radyn Badraun scored to make the score 8-6. With under a minute left, the Knights found Seiler for the goal with 45 seconds, cutting the lead 8-7.

On the ensuing faceoff, Henry Perkins won it for Foothill and immediately called time out with 38 seconds remaining. That was more than enough time for the Knights to score the equalizer, as Seiler got the pass, pump faked and scored the goal with four seconds left to force overtime.

In overtime, Foothill only needed 15 seconds to notch the game-winner, as Perkins won the faceoff, had his teammates get the ball up the field, and eventually, Babb found Fox for the game-winning goal, allowing his teammates to storm the field and breathe a sigh of relief. The Knights held the Titans to only 15 shots all game, which took some pressure off of Garcia.

“We got to come out first half and be a better team. Right now, we’re a second half team and we got to change that up,” Seiler said.

The first quarter didn’t see a team score until half the quarter was done, as Pistone found the back of the net to give his team a 1-0 lead. Goals from Cole Pollard and John Clark-Dickson gave Tesoro 2-1 until Seiler scored his first goal to knot the score up at 2-2.

Pollard added a late goal in the opening quarter for the Titans, who led 3-2 after the first quarter. Babb knotted the score at 3-3 with an assist from Reese Boyd one minute and nine seconds in, but then Foothill was held scoreless the rest of the quarter.

While the Knights were in a drought, Tesoro added goals from Charlie Richardson, Badraun and Pollard, as it took a 6-3 lead into halftime. The third quarter was a flip flop for both teams, as Foothill held the Titans scoreless for all of the quarter while scoring goals from Seiler, Copeland and Babb tying the game at 6-6 and setting up a dramatic fourth quarter.

Pollard led Tesoro with three goals while Badraun added two. Farris, Richardson and Clark-Dickson each found the back of the net once while Jackson Brady made 11 saves.

“We played good at every facet of the game – groundballs, time of possession rides clears, we played physical and our shot selection was outstanding We played our best today and I’m proud of our guys,” Tesoro coach Scott Grubert said.

The Knights now turn their attention to Friday’s semifinal game against Mater Dei, as they’ll look to avenge their 9-7 regular season loss to them. Knights coach Jon Fox said his team is going to have to play a full four quarters if they want to top the Monarchs.