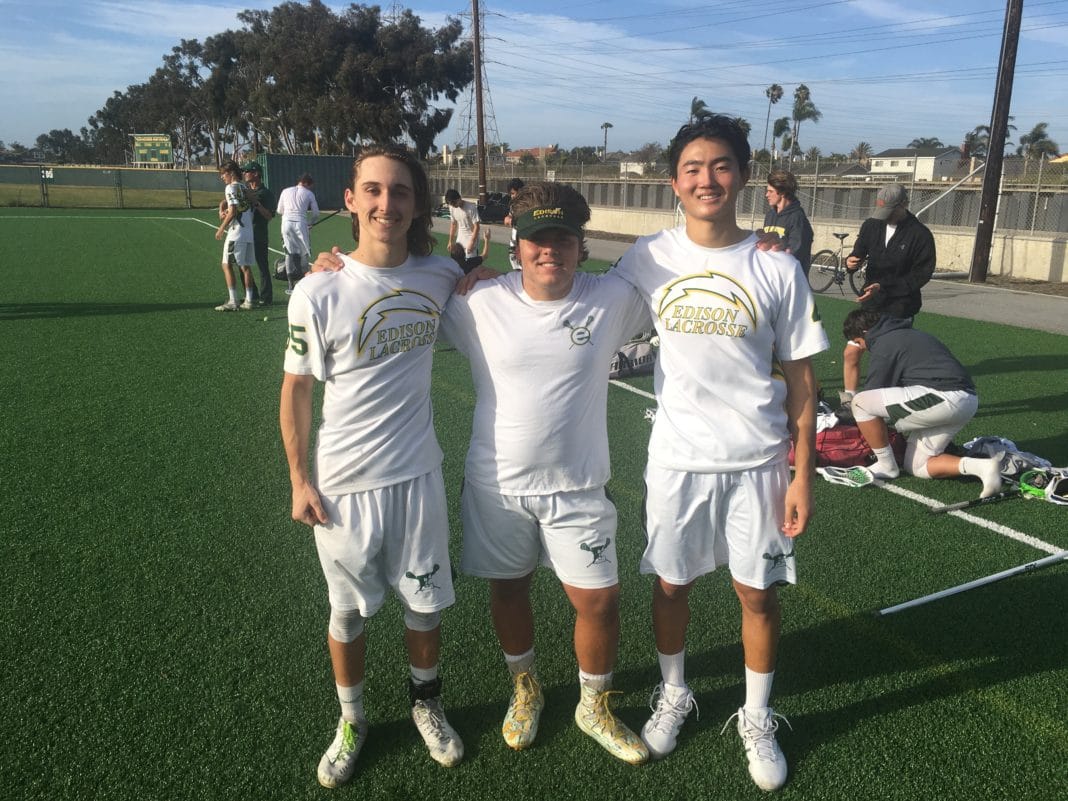 The Edison boys’ lacrosse team came up with a big win against a playoff contender from Los Angeles on Monday.  The unranked Chargers hosted St. John Bosco, no. 16 in Los Angeles, and came out on top by a score of 11-8.

Whereas the Braves came into the game with a 9-4 record, Edison has struggled as of late, losing six of its last seven. The game presented an opportunity for the Chargers to build some momentum for 2019 in the final week of the season, and Edison seized it.

“Finally we played like we hoped for. We [the coaching staff] have been preaching this all year about heart and grit. We finally played some defense that was body up not sticking or chasing. Young guys chase stick, experienced teams chase body,” Chargers co-coach Dieter Nemes said.

The game was relatively low-scoring most of the way, as the two teams found themselves tied at 3-3 at halftime. The Chargers went ahead 5-3, but were shutout in the last 7:13 of the third quarter. While Edison was unable to score any goals, the Braves cashed on four consecutive, giving them a 7-5 lead after the third.

Edison began its comeback by scoring two straight goals from Drake Choi, tying the game at 7-7 until the Braves regained the lead at 8-7 with a goal from Sean Park. But that goal turned out to be the last goal the Braves would score, as the Chargers gave the Braves a dose of their own medicine by shuting them out for the last five minutes of the game and scoring four straight, giving the Chargers their biggest victory of the season according to Nemes.

Choi led the Chargers with five goals while AJ McLean added three of his own as well as an assist. Evan Welman found the back of the net twice while Tyler Timmons scored once for Edison, which got 10 saves from Hunter Whalen.

Myles Dolphin led St.John Bosco in scoring with four. The Braves also got scoring contributions from Mitchell Myers (2G, 1A), Isaiah Dolphin (1G, 2A) and Park (1G and 2A). Defensively, Jacob Snider anchored the Braves’ defense with eight saves.

The Braves close out the season on Friday at Downey at 7 p.m. Jewett says all the Braves can do is win out and hope they finish in the top 16 at the end of the regular season.

“Hopefully we can come out strong and get a win. We’ll see. That’s out of my hands. That’s in the committee’s hands,” Jewett said.

The Chargers’ (7-9) next game is Wednesday at Marina at 6 p.m. Later on in the week, they close out the season on Wednesday at Los Alamitos at 10 a.m.