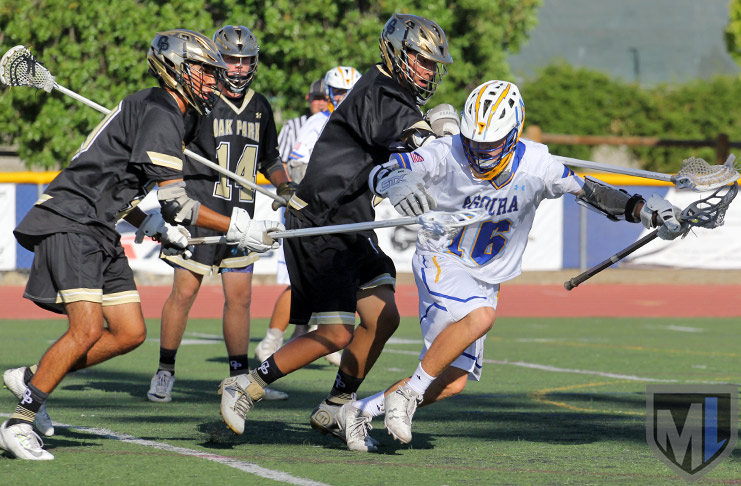 Agoura and Oak Park are no strangers. The schools are a stone’s throw apart along Kanan Rd., and many players and coaches from both teams are involved with the LA Mavs club program. They know each other well, and for more than 38 minutes Thursday night, Oak Park had the better of its neighborhood rival with a spot in Saturday’s semifinals on the line.

But the Chargers — who have won six one-goal games this season, three in overtime — are no strangers to late-game drama. A three-goal rally tied the game 5-5 with 4:50 to play, and freshman Dougie McCarthy — himself no stranger to late-game heroics — dodged from X to score the game-winner with 51 seconds left. It was the Chargers’ second one-goal win over Oak Park this season.

No. 4 Agoura (15-5) advances to Saturday’s quarterfinals, where it will face No. 1 seed Palos Verdes (16-4), which beat Newbury Park in its quarterfinal Thursday.

“I’m just really happy with our guys,” Agoura coach Sean Lindsay said, “proud of how when the fourth quarter came, we just kept scrapping, kept fighting. That’s basically the position we’ve been in all year. We rely on each other; individually, if everyone steps their game up, then as a team we will, too, and that’s why we’re winning these ones at the end.”

Until the fourth quarter, though, the Chargers couldn’t solve Oak Park’s zone defense. Agoura took 15 shots in the first half but put only four of them on goal.

“That’s basically beed our Kryptonite all year,” Lindsay said. “We struggle with the zone. We were getting our shots, I thought, but we just weren’t burying them.”

The Agoura offense produced only one goal in the game’s first 38 minutes (the other resulted from a turnover in transition), and Oak Park appeared to have the Chargers bottled up.

“Sean and I know each other very well,” Oak Park coach Tarik Ergin said. “I know their players; they know ours. I know they’re not comfortable playing against a zone, so we said we’re going to go with it. We did it one other game this season, and it worked so well that I didn’t see any reason not to, and it worked. We held them to one goal at halftime.”

In the fourth quarter, though, Agoura’s shots finally started finding the net. Jacob Roub scored off a pass from Gage Garrison to pull the Chargers within 5-3 at the 9:39 mark. Four minutes later, McCarthy scored to bring Agoura within one, and one minute after that senior Marty Shargel scored from the crease off a Garrison feed to tie it 5-5 with 4:50 to play.

With about a minute and half left, Agoura called time out. While the Chargers were setting up their final play, so was Oak Park.

“Coming out of the time out,” Ergin said, “I figured Sean would have some kind of a play called for the zone, and we’d give them a curveball.”

So Oak Park came out in man to man, and after the Chargers ran the perimeter for 20 seconds or so to confirm the defense, they put the ball in the hands of the freshman, McCarthy.

Thursday, he did it again.

“This was a big game for him, the biggest he’s ever played in,” Lindsay said. “He struggled in the first half, turned it over a couple of times under pressure; they had some good defenders on him. To his credit, he just stayed the course, stayed the course, and kept going and made huge plays for us.”

McCarthy and Shargel each scored twice for Agoura, and Roub and George Galer each scored one. Garrison had three assists.

The late-game drama overshadowed a stellar game by both goalkeepers. Oak Park’s Connor Kaminsky finished with 11 saves, eight of them in the second half, and Agoura’s Zach Tripp kept his team in the game with 10 saves while the offense figured things out.

“Now we have a chance to play PV again and try our best,” Lindsay said of Agoura’s semifinal opponent, which beat the Chargers 15-5 in March. “We’ll give it our best effort.”