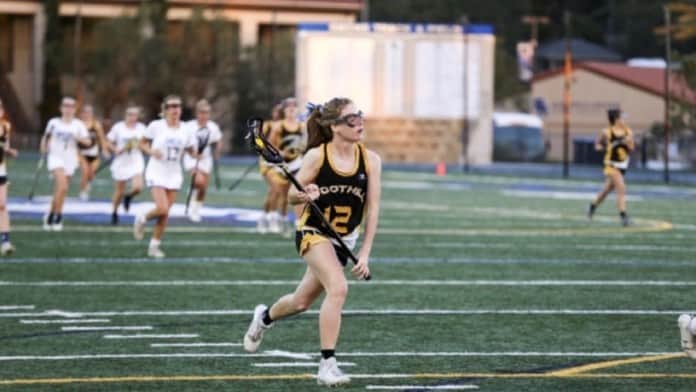 Foothill girls lacrosse senior-to-be Andie Pomeroy has committed to study and play NCAA Division 1 lacrosse at the University of Cincinnati. The announcement was made Thursday.

“I made a trip out to Cincinnati this past December upon being invited by the coaches to attend a clinic they were hosting. When I visited, I had a great experience touring the school and the urban areas around it,” Pomeroy said. “I loved the campus and the city itself, and at the clinic I felt like I clicked with the coaching staff. I’ve always wanted to go to a big school on the east coast/in the midwest, so this was an amazing opportunity for me!”

Pomeroy, a team captain and three-year varsity player, helped lead Foothill to a 4-0 record before the season ended due to the COVID-19 pandemic.

“Andie has grown tremendously as a player! Her speed is unmatched and unlike any I have seen in a high school athlete. She has fine tuned her skills and craft over the past two years as well. Lastly, her confidence has grown and her willingness to take her mistakes, learn from them and challenge herself has helped her develop into the player she is today,” Knights coach Cristina Johnson said.

In addition to being a junior captain, Pomeroy also made the Women’s National Team with 21 other players. One of Pomeroy’s biggest games for Foothill came against Santa Margarita in the Orange County semifinals in 2019 when she recorded a hat trick to help the Knights advance.

“I’d love to thank my family at Foothill, our team is truly so special and it’s been an honor playing with my best friends over the past 3 years,” Pomeroy said.

Johnson said that Pomeroy is still working to reach higher levels of success and is continuing to push her limits. One of the things Johnson pointed out was Pomeroy’s ability to dominate the draw controls with speed and aggression.

“Andie has made FHS better by pushing herself every day at practice and outside of practice. By her efforts in working her hardest every day, she pushes her teammates to be better. She isn’t afraid to push herself and make mistakes,” Johnson said.

Cincinnati went 3-4 this year before its season, and the rest of the NCAA women’s lacrosse season, got cancelled. The Bearcats had lost their first four games before ending the short season on three-game win streak.