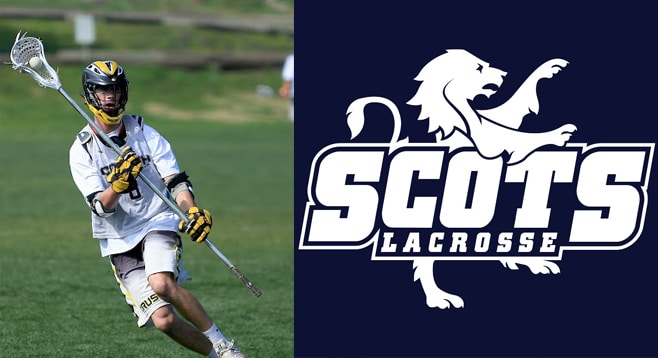 Owenn Geis, a standout defenseman at Foothill High School, has committed to Division III Gordon College in Wenham, Mass. Geiss, who is a 2014 captain for the Knights, will be part of the Fighting Scots Lacrosse team next year.  At 6-foot-3, 190 lbs he is one of the top defenseman in Orange County. Geiss caught the attention of many college coaches at the Adrenaline Shootout in Sonoma and the Adrenaline High Rollers tournament in Costa Mesa.

“Owenn is a top notch kid both on and off the field,” said Foothill Coach John Fox. “Besides being the captain and leader of our team, Owenn won the Hank Nunez  “Knight of the Year Award for Citizenship” for volunteering countless hours for charity last year as well as starting a lacrosse program with Lacrosse the Nation in Nicaragua. Gordon College has a special kid here.”

Said Fox, “He’s a home grown product of our lacrosse system, starting as a Tustin Tiger in 4th and 5th grade to  Adrenaline Starz, OC Kings Elite and captain of our varsity high school team. Owenn had many college choices but after he visited many of them he found the perfect fit.  I am just very proud of him.”

Foothill finished 17-5 last year with big wins over La Costa Canyon (San Diego)  and eventual-champions St. Margaret’s Episcopal. St. Margaret’s got their revenge in the playoffs and stopped Foothill’s run for another Southern Section Championship. This year the Knights are reloaded and had a great showing at the Palm Desert Lax Classic where they won the tournament with their club team, OC Crush.