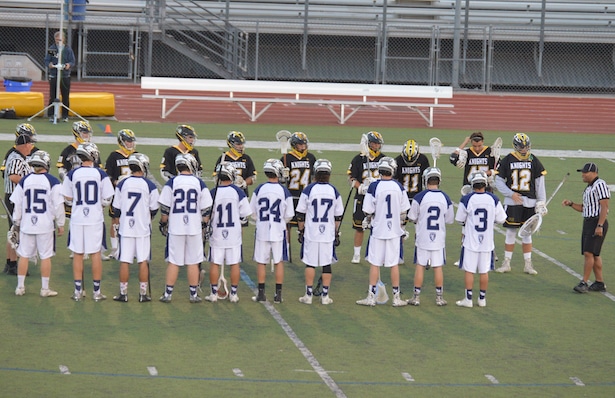 Foothill defeated Trabuco Hills 8-7 Saturday night in one of the most exciting games of the season thus far. The Knights dominated early, jumping out to a 5-0 first quarter lead,  and then hung for the win when the Mustangs’ five unanswered goals in the fourth quarter proved to be too little too late.

It was a game the Trabuco Hills Mustangs had circled on their calendars for months. The Mustangs are in coach Eric Bassett’s inaugural season and the Foothill Knights have long been the program the Mustangs hope to emulate.   The Mustangs strive to attain the same elite status of the program that has won seven Southern Section titles and is consistently ranked in the top five.

The night began with Foothill jumping out to an early lead off a Steven Oberly dodge from X and finish for the 1-0 lead. The Mustangs were bit by the penalty bug early and went two men down for a full minute. The Knights capitalized on the Mustangs penalties with man up goals from Nathan Skeen and Kevin Kodzis. The Knights were showing why they’re one of the county’s best teams by dominating possession and tempo. Oberly and Kodzis added two more goals and with less than 3 minutes to go in the first quarter it was all Knights with a score of 5-0. The Knights zone defense and relentless ride was giving the Mustangs fits in the early going. The Mustangs were finally able to get on the scoreboard when Sophomore Jason Kauo scored from the crease off an assist from Billy Barron. Kauo’s goal ended the first quarter scoring at 5-1 in favor of the Knights.

The second quarter saw older brother John Kauo bury a shot from up top off an assist from Barron to bring the score to 5-2. Both goalies Nick Wilson and Ryan Blank treated the spectators to some outstanding saves in throughout the night. Wilson stopped consecutive shots, only to see Foothill’s Matt Harris pick up one of the rebounds and bury it in the back of the net to put the Knights up 6-2 to end the first half.

The second half continued with Foothill continuing to control possession and tempo. The Knights added two additional goals (sorry I had a call from work and missed who scored these two goals) and appeared to be running away with the game as they went up 8-2 to end the third quarter. The fourth quarter began with the Mustangs’ Scott Barger scoring a goal after coming away with a defensive take away. Barger’s take away and goal seemed to light a fire under the Mustangs and shift the momentum away from the Knights. The Mustangs were suddenly controlling tempo while defensemen Jason Rivera,  Jonathan Salgado and Patrick Zanio combined to slow the Knights attack.

Trabuco Hills Freshmen Holden Evans added back to back goals off of assists from Barron to bring the Mustangs back into the game at 8-5. Mustangs Jake Lansner turned in a workmen like performance at the face off X and battled his way to several additional possessions. Time was slowly running out on the Mustangs as they continued to mount their comeback. Mustangs’ Harrison Evans showed incredible heart and determination by playing through and injury and scoring on an outstanding individual effort from X to bring the Mustangs within two goals at 8-6.

The Mustangs were given quite the scare when Barger was on the wrong end of a slash and went down holding his knee. The resulting man up saw the Mustangs capitalize when Barron cut through the heart of the Knights defense and scored to cap off five unanswered Mustangs goals and bring the score to 8-7 with 47 seconds to play. The Mustangs chances for a tie fell by the wayside when a procedure penalty was issued during the ensuing face off. The Knights were able to weather the storm, maintain possession for the remaining 40 seconds and come away with the hard fought victory. The game proved the Mustangs are capable of playing with any team in the county on any given night.