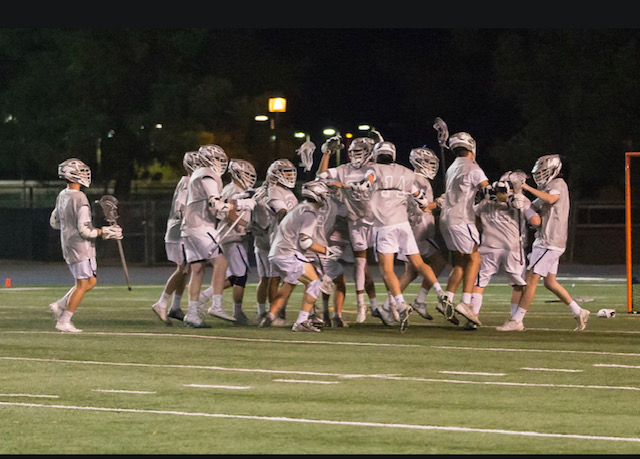 May Madness is here, and there have been some good games already.  Thursday’s quarterfinals featured two instant classics that went down to the wire;  Foothill over San Clemente and Trabuco Hills over Santa Margarita.

The survivors of the those two games will kick off Saturday’s double-feature in Foothill v Trabuco Hills II.   This one sets up to be a thriller. No slow play, pack it in zones, or 1:30 to sub on and get it around. They’ll play lacrosse. Lots of fire power, plenty of defensive talent, and as we saw in the first game two goalies who have been on fire this season.

The Knights had lots of scorers Thursday. Troy Hofer (4 goals) had a slick fake pass and stuck one with high heat.  Roman Pistone did his thing with two goals, one assist, three groundballs and two caused turnovers.  The youngster has been sneaky good all year and can dee up as well. The game winner came from Easton Babb as he took checks inside from two defenders, drew a flag and still scored from five yards out. Very tough kid. He’ll be ready to go.

Trabuco has some fire power of their own. Facing a packed in zone Thursday they got the job done. AJ Switzer has been fantastic this season. Fun to watch, he should be on his game, unselfish player. Holden Evans has plenty of talent as well, he’s been tough, showed high lacrosse IQ vs zone, he’ll adapt to any defense. Justin Paget and Josh Burdette each had two in quarter final win. Throw in Jared Friesen and coach Bassett’s offense has plenty of options and balance. Keep an eye on the man up, they move that ball.

Foothill dee once again applied pressure, set fast tempo and pushed transition for coach Fox. Zack Yourstone, Josh Anderson, Caden Salkeld, Jeffrey Keizler, and Massimo Ferris should all be ready on Saturday, they’ve been tested with a tough schedule. Foothill once again had tough schedule. Joey Garcia has been very good in goal, been tested for sure.

Trabuco gave up just five goals against Santa Margarita in the quarter final game so they can dee up. Freshman Logan Angel, Hunter Teston and Max Wulterin should be ready. Cooper Gatine looks to be big game ready, he’s been a pleasant surprise for the Mustangs.

As for faceoffs, Justin Nakamura of Foothill was 6-11 against San Clemente and battled hard all night. Colin Seedorf has just been nasty recently for the Mustangs.  He went beast mode on Thursday.  He’s fun to watch and put on a show!

The X-Factor: These big games are often decided by the little things and under-appreciated players stepping up at the right moment. Both benches run deep but Chris Demarco gives the Mustangs the X-factor edge. Good goalies are hard to find but Trabuco has two of them.

Demarco is a senior that converted from defense to goalie after his freshman at Coach Bassett’s request. He worked really hard and was the starting goalie the beginning of his junior year. He was narrowly replaced later that season by Gatine who got hot as a freshman.

Coach Bassett knows that he can count on Demarco if the call comes and reports that Demarco never complained and put the team first. He never missed a practice and became an invaluable insurance policy in addition to being the team’s biggest fan on the sidelines. “Team players like Chris are hard to find,” Coach Bassett said. “I will never forget what he and his family did for our program, thank you”

Fan base edge: the Fan base the edge goes to…lets see on Saturday.  Both stadiums were rocking Thursday, loud.  I’d expect the same Saturday. Bring the noise!

The Mustang student section was out in full force today. Best student section in the OC! We appreciate the support. See you at the Final Four! #earneverything #thhslax #family pic.twitter.com/Ix9MobXnx4

The Twitter Edge: The advantage here goes to Foothill. The @FHSLaxNews Tweetmaster may be the best the game has seen since the legendary Frank Crance retired from CdM. Here is just one sampling of his work:

Devin Arkison was a 3X All-American at Hobart. He offers defensive training and recruiting consultation through LockdownD.com