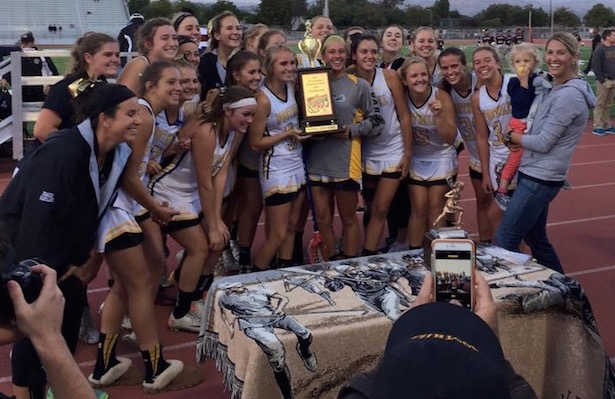 The Foothill High School girls’ lacrosse team claimed the 2015 US Lacrosse – OC Chapter championship Wednesday night with a thrilling 10-7 victory over Beckman in overtime.  In a true team effort, Foothill had many heroes.    Julia Taylor had 1 goal and 1 assist and was awarded the game’s Most Outstanding Player.  Meridian Lee dominated draws winning 17 of 19.  Hannah Upshaw had 7 saves, and Carly Naud (4 goals), Sophie Forester (3 goals),  Meridian Lee (2 goals including the game winner in overtime) and Carly Escalette (1 assist) teamed up with Taylor to provide the offensive firepower.

The real hero for the Knights though was the team’s character and resilience, because another Taylor, Beckman freshman Taylor Stern , stole the ball and almost the game for the Patriots.  With about about 40 seconds left in regulation and Foothill holding possession and a 7-6 lead, Stern  alertly intercepted an inbounds pass and raced down field to give the Patriots one last chance to tie the game. With 24 seconds left,  Janice Shih from a free position found an open Michaela Kyte who scored the tying goal to send the game into overtime.

The Knights responded to the turn of events like champions and Lee, Naud, and Forrester ripped off three goals within a span of 38 seconds in the first half of overtime to clinch the ‘ship with a 10-7 victory.

Shih led the Patriots with five points (4g, 1a).  Stern,  Kyte and Shea O’Donnell scored one goal each.  Holly Woodward dished out two assists and Kylie Filipek had an assist. Claire Duchene had 14 saves.

Beckman finishes the season with a 14-5 record.  Foothill advances to the Southern Section championship against Redondo Union at Mira Costa High School at 10:00 a.m. on Saturday.