Foothill Takes Care of Business in Victory Over Santiago 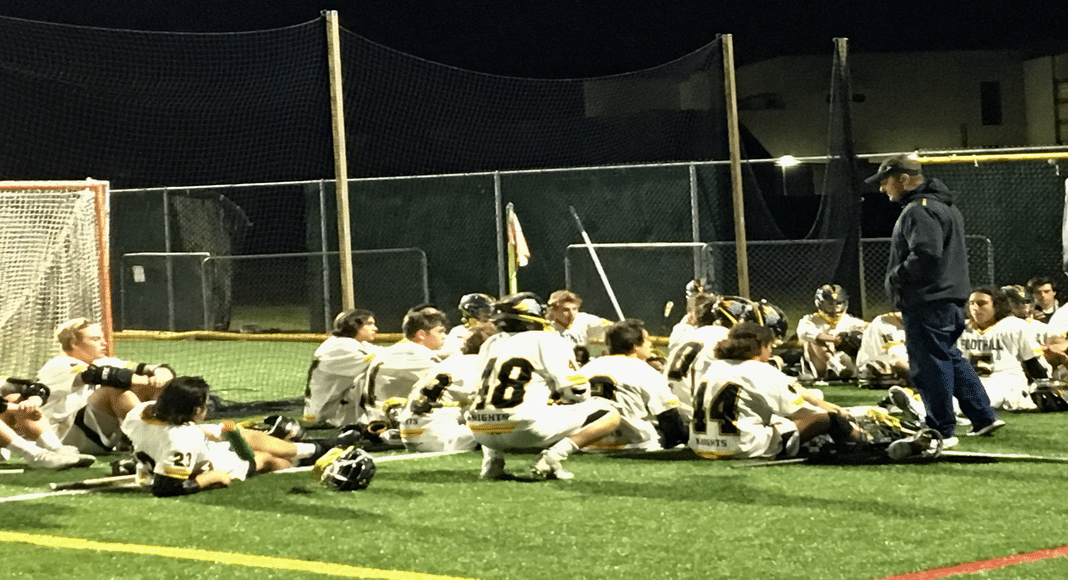 Behind a solid team effort, the Foothill Knights enjoyed their second win of the season as they handily defeated Santiago 14-5 Wednesday night.

Coming off a big overtime win over LA No. 1 Loyola on Saturday, the Knights (2-0) are making it known that they’re more determined than ever to take the Southern Section crown that they last won in 2014. The Sharks of Santiago (0-2) proved to be no match for this well-experienced Foothill squad, who were without their star attackman Ellis Geis due to injury.

Ranked No. 1 in Orange County in MaxLaxOC’s preseason fan poll, Foothill was obviously a heavy favorite going into this one. However, Santiago struck quickly when Jack Wolfe won the opening face-off and took it all the way to put his team up 1-0. The junior midfielder was Santiago’s motor the entire night, creating plenty of chances to keep Foothill on its toes.

Despite falling behind early, Foothill responded immediately like the reigning OC champions they are and slotted away two goals to take a lead they would never relinquish. Many of Foothill’s goals came from teamwork and crisp ball movement that bent Santiago’s defense out of shape.

By halftime, Foothill already had blown the game open, taking a 9-2 advantage over Santiago. As good as the Knights were playing on offense, coach Jon Fox said it was actually his team’s defense that created many of those scoring opportunities.

Foothill attackman Josh Fox had himself a night, as he scored or assisted in half of the team’s 14 goals. The senior finished the match with four goals and three assists while teammate Troy Hofer pitched in with three goals and one assist.

In the midfield, Foothill freshman Roman Pistone and senior Grant Roess were terrors as Santiago could not handle their size and blistering speed. Other than a few consolation goals toward the end of the game, Santiago’s offense was completely stymied by Foothill’s relentless pressure and quickness.

Coach Fox said he is pleased with the way Foothill has played in its first two games, but he also believes there are still some issues that need to be addressed in the coming weeks.

Both Foothill and Santiago will return to the field on Saturday to face off against Oak Park and Los Alamitos, respectively.