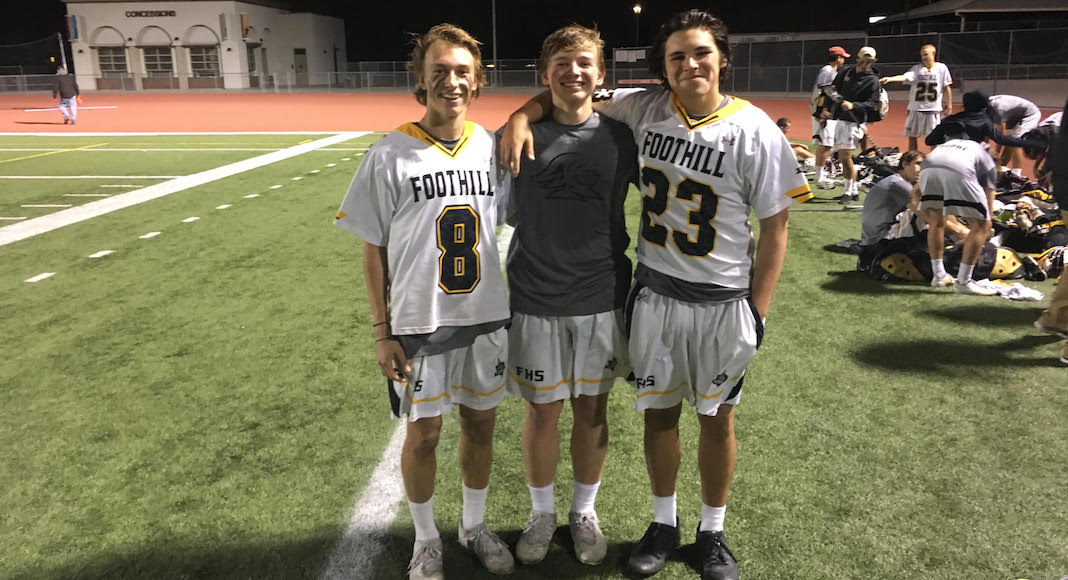 “We’re just working on playing better and better each time, that’s our goal. I think it’s so exciting that the two top programs in Orange County get together, it’s always is a great matchup. So much respect for CdM and coach Mix and everything they’ve done,” Foothill coach (and proud dad) Jon Fox said.

Whether it’s a game in March or the County Championship in May, the intensity is always turned up to high when these two rivals meet.  Saturday night was no exception with both teams having streaks to attend to.  The Knights were hoping to stay perfect in 2018 while the Sea Kings were looking to avoid their first three-game skid since they became a CIF program in 2005.

The Sea Kings came out fast, and three minutes into the game Simon Hall had them on the board.  Unfortunately for the Sea Kings, that would be their only lead of the night.

Foothill responded with a stifling team defense that allowed the Sea Kings only one more goal for the remainder of the half while the Knights offense steadily built up a 6-2 lead by halftime.

A 6-2 deficit is not insurmountable by any means, but the Foothill defense continued to contain the Sea Kings and both teams equaled their first-half output in the second, to reach the final score of 12-4.

Knights over CDM 12-4. Here’s some first half action. pic.twitter.com/upD3dQN1JB

For the Sea Kings, Eric Fries led the way with two goals while Hall and John Bethel added one goal apiece. Kyle Cord made five saves for the Sea Kings, who were held to its lowest goal total of the season.

Despite the loss, CdM coach G.W. Mix said that he saw some good things from his team.

“I saw some really nice things from our kids tonight, and we’ll build on that. Our extra man group did a good job. We still have to clean up our clearing game a little bit, but we’re getting better. Hard to imagine saying that in light of a 12-4 defeat, but I really believe we’re getting better,” Mix said.