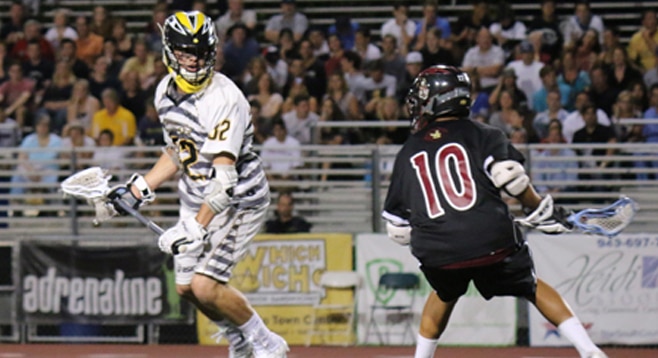 Wednesday night’s game was a much-anticipated rematch between two Orange County lacrosse powerhouses.  Foothill built up an 11-4 lead against JSerra before hanging on for a 13-12 victory.  With two talented teams known for aggressive play featuring freewheeling offenses, tenacious riding, and ball-hawking defenses, more of the same was expected for Wednesday night.

The two teams went right at each other from the opening faceoff.  Austin Babb continued his season long domination at the faceoff x by getting the Knights the opening possession.  The ball eventually found its way to the crosse of Nate Marano, who used one of his signature low-post moves to get underneath his defender for a clean shot and hit the pipe less than a minute into the game.  Foothill got the rebound, but a nice save and clear by Jake Henigman who sent the action the other way, where Mitch Kingsley found iron instead of twine for the Lions about a minute later.   JSerra got the rebound from Kingsley’s shot but lost possession when Ryan Blank (11 saves on the night) stepped out from between the pipes to intercept a cross crease pass.

So two minutes into the game there was already a missed opportunity by each team’s top offensive threat, a great play by each team’s goalie, and no score.  At the 9:30 mark of the first period, JSerra got the first man up opportunity of the game when Nate Marano was sent off for a cross check.  Foothill successfully fended off the EMO, but JSerra continued to press after the penalty expired, and Logan Olmsted scored the first goal of the game with an assist from Kingsley at 8:09.

JSerra is a team that tends to feed off momentum and score in bunches, and true to form, unassisted goals by James Yanes and Brendan Lynch in the next 1:30 gave JSerra a 3-0 with 6:37 left in the first quarter.

Unfazed by the JSerra flurry, Foothill continued to attack at both ends of the field.  The Foothill aggressiveness paid off shortly after the Lynch goal, when Owenn Geis picked up a groundball, and carried to the offensive end where Case found the back of the net to make it 3-1.  A minute and half later, Matt Marano took his turn at turning defense into offense when he dished off to Drew Boyd , who finished to make it 3-2, which is where the first quarter ended.

Building on the momentum gained at the end of the first quarter, Foothill dominated possession through much of the second quarter and scored three unanswered goals.  Boyd, assisted by Case, scored his second of the night with a low to high rip at the 10:29 mark.  Babb won another faceoff to get his team another possession, and 28 seconds later it was 5-3 Foothill when Case assisted on a Nick Matzek goal.  Working off yet another possession courtesy of Babb on the ensuing faceoff, Boyd chased down an errant pass from Case to keep the ball in play and Foothill’s possession.  The ball found its way Nate Marano who fought his way through a double team and finished high to high on the crease to make it six unanswered goals for Foothill and a 6-3 lead with 8:25 to play in the half.

The clock worked its way down to the final two minutes of the half with Foothill still controlling possession and the score still 6-3.  While this is a comfortable situation to be in against most teams, this is not the case when the JSerra Lions are the opponents.  Goals by Lynch and Olmsted (assist Yuta Murata) in the final 1:10 made it a 6-5 game at the intermission.

A Nate Marano sure-to-make-Top-10 plays of the week goal pushed the Foothill lead to 7-5 at the 8:40 mark of the third quarter.   Cutting from right to left, Marano collected a pass from Jake Haigh, and quick-sticked a behind-the-back shot that found top corner, and put the Foothill fans and bench into a frenzy.  Fueled by the Marano goal and another Babb faceoff victory, Kevin Kodzis split a double team and took advantage of free passage to the goal when no slide came to make it 8-5 with 6:20 to go in the third.

Still the Lions would not go away.  Jake Schleppy scored unassisted at 5:39 before Tucker Guyot   scored a goal that competed with Marano’s on the applause meter.  Guyot carried the ball coast-to-coast, wrapped around the cage, and fired a high to low shot with his long pole past Blank’s foot to make it a 1-goal game with 3:45 to play in the third.

Then with 1:12 left in the quarter, Brendan Lynch ripped one past Blank to seemingly tie the game.  The goal was immediately waved off though because of an off-ball unnecessary roughness penalty.  It was JSerra’s first penalty of the game.  20 seconds later Case dodged off a feed from Nate Marano and scored the EMO goal, and just like that a game that may have been 8-8 was now 9-7, which is where the third quarter finished.

Foothill continued to press to open the fourth quarter but the JSerra defense kept the score at 9-7. Defenseman Nick Georgagi added another clip to the game’s highlight reel when he stepped into an empty crease on a clear gone awry and took a shot off the shoulder at point blank range to keep the Lions within two.   However goals by Kodzis at 4:22 (assist Case) and 2:59 (assist Boyd) pushed the margin to three goals, and with Babb winning faceoffs and the Knights able to control possession, the outcome was beginning to look inevitable.

If any one trait characterizes the 2014 Lions though, it is that they never give up, and Kingsley scored off a timeout with 1:47 left to make it a two-goal game and give his team a shot.  Babb won the ensuing faceoff though and Foothill chose to kill much of the remaining clock before Case dished out his final assist and Ryan Falbo scored his first goal of the night to get to the final score of 12-8, and start the sideline celebrations.