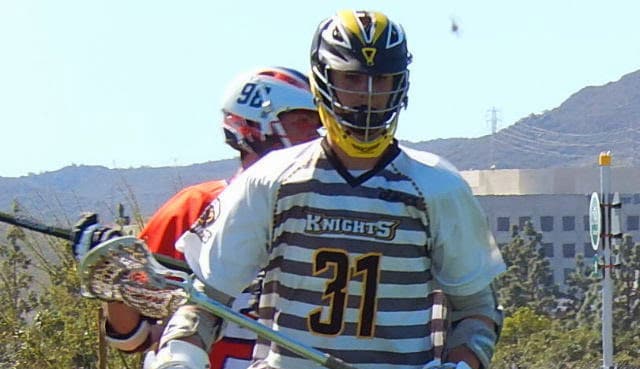 Marano, at attack, scored six goals as six other teammates also scored: Attackman Nick Matzek had four goals and an assist; attack Nathan Skeen had two goals; and Holy Cross commit Kevin Kodzis had a goal and three assists. Kodzis, at attack, had two assists to Marano in the waning minutes to put the game away. Middie Ryan Falbo added a goal and assist and midfielder Warren Case had a goal and three assists. Middie Jake Haigh added an assist along with Logan Hofer and LSM Spencer Davis.

Foothill’s defense, a combination of seniors, juniors and sophomores, held its opponent to less than six goals for the third straight game. The Knights, 3-0, were led on defense by Owenn Geis, who had four caused turnovers and Kieran Vaughn with six groundballs. Sophomore goalie Ryan Blank, returning from injury for his first full varsity game, had 5 saves.

Faceoff specialist Austin Babb controlled the midfield, scoring once with an assist and grabbing five groundballs. Case and Marano scored in the opening minutes, followed with goals by Matzek, Babb and Skeen, the latter coming from a breakaway pass by Hofer. That opened the scoring to 5-0. It was 8-0 in the first half before Tesoro scored twice to close the lead. Foothill led, 9-2, at halftime.

Foothill (3-0) will host one of Northern California’s strongest teams, Concorde De La Salle, next Friday at Tustin’s Northrop Stadium for FHS’ first game home game since it opened fall of this school year. Tesoro battles Newport Harbor on Monday and Santa Margarita in a pair of home games.