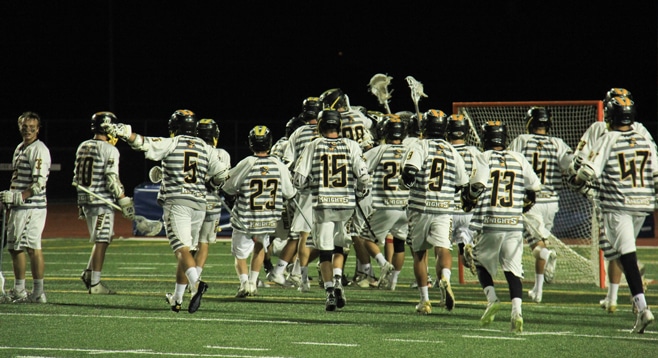 With the season down to its last week, and Corona del Mar coming off of statement wins against Santa Margarita and St. Margaret’s, all eyes were on the Orange County’s No. 1, Foothill High School vs. San Diego’s No. 4, La Costa Canyon.

Could the Knights defeat the visiting power from San Diego, and fend off CdM’s challenge for the No. 1 spot in the local polls? The answer is an emphatic, yes they can. Led by a standout performance from attack man Nate Marano at one end of the field, and goalkeeper Ryan Blank at the other, the Knights turned away LCC 14-9.

Marano scored the Knights first seven goals, including five in the first, en route to a career-high eight goals. With the playoffs looming, Marano gave defensive coordinators throughout the county something to think about by scoring on a fastbreak, from behind the goal, a long shot, a steal from a goalie pass and a behind the back shot, lifting his already solid season yet a notch higher. With the score Marano 7, LCC 2 early in the second quarter, Foothill seemed to be in command until the Mavericks scored four unanswered goals to make it 7-6.

The Knights used the LCC threat to show that they are not a one-man team and may have the deepest roster in the County and maybe the state. With sophomore goalie Blank stopping a season-best 18 shots, the Knights used their depth, some of their other offensive weapons, and a defense led by sophomore middie, Chris Reem that kept the Mavericks desperate for some kind of breakthrough that never never came.

Foothill scored four straight goals after La Costa Canyon had closed to within one, including a blazing shot from middie Matt Harris and a man-up goal from attack Nick Matzek from a pinpoint pass by attack Kevin Kodzis. Matzek had three goals and Kodzis added a score to put the game away at 13-8 with 6:55 remaining. Middle Warren Case added three assists and a goal; his score came from a hidden ball trick.

Next up for Foothill; Rancho Bernardo on Monday and a trip to Beckman on Friday for a season finale that will be closely watched by the playoff seeding committee.