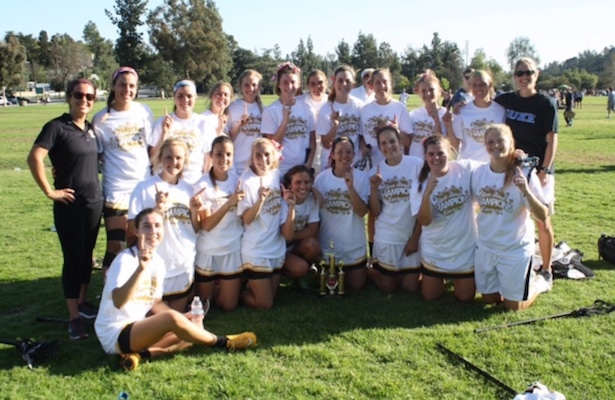 On a warm, cloudless day in Pasadena the Foothill Knights girls lacrosse team opened its season on Saturday impressively by winning the top bracket at the annual Rose Bowl Jamboree. In a bracket with some of the strongest Orange County teams (Los Alamitos, Corona del Mar and Aliso Niguel) along with some of the top LA teams, winning would not be easy. Their first game was against Palos Verdes, and the Knights cruised to a 17-1 victory. Next up for the Knights was perennial powerhouse Los Alamitos. With a balanced offensive attack and solid defense, the Knights prevailed 9-3. The Knights met an always tough Corona del Mar team in the championship game. After a low scoring hard fought first half by both teams with the score knotted at 2, the Knights scored 5 unanswered points to win the game 7-2. The Knights scoring for the day was led by Sophie Forester (9 goals and 2 assists), Lorien Bandhauer (6 goals and 4 assists) and Julia Taylor (Oregon) (6 goals and 3 assists).  A solid defensive effort by the Knights led by goalie Hannah Upshaw (verbally committed to USC) with 10 saves on the day for a .6% save average. Brie Ratkevich and Taylor led the way on ground balls picking up 11 and 10 respectively. Meridian Lee was unstoppable on the draw (24 draw controls on 29 draw attempts). Next up for the Knights is Capistrano Valley High School on Thursday March 12th.