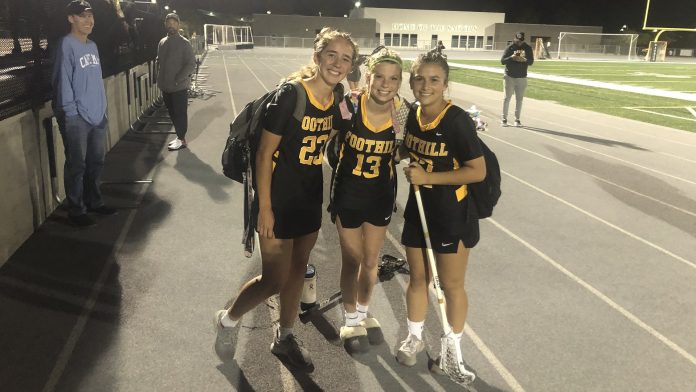 “We just needed to stay composed and work as a team like we’ve been doing this entire season. We did really well playing a two-half game, so it’s really exciting to go semis,” Torres said.

From the beginning to the end, Foothill took care of business. The Knights scored the first six goals of the game and kept the Sailors off the scoreboard until Olivia Gritzmacher tallied the 11:50 mark of the first half. After Gritzmacher’s brief interruption, the Knights picked up right where they left off and finished the first half with a 12-1 lead.

Foothill’s man-to-man defense and draw domination kept the Newport Harbor scoring opportunities to a minimum and mitigated the threat of the Sailors’ other top scorer Joelle Rothbard.

“Cutting them off and having Joelle in a faceguard was our biggest thing and no matter what the score was, keeping her out of the play was most important,” Cristina Rodriguez (Johnson) said.

Gritzmacher had both Newport Harbor’s goals while Lucy Valdes made seven saves. Sailors coach Brooke Martini was proud of how team fought this season despite what was thrown at them, as the Sailors (15-6) won a program record 15 games and the Sunset League.

Foothill now turns its attention to the semifinals, where it’ll face the winner of the Redondo Union-Mater Dei quarterfinal. Despite who her team faces, Rodriguez said her team needs to needs to bring the same energy and gameplay it had in Tuesday’sl win.

“A lot of energy, playing our game, intensity, draw controls, just making sure we control the pace of the game and playing our game the whole time,” Rodriguez said on what her team will need to do in order to win their semifinal game.