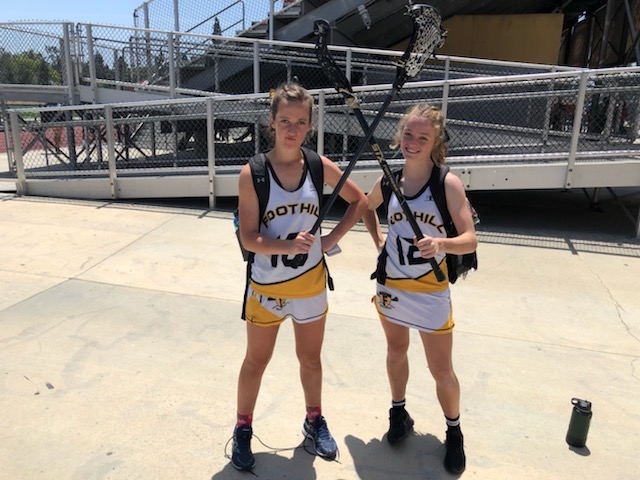 The top-seeded Foothill girls lacrosse team crushed Santa Margarita 19-4 on Saturday at Segerstrom High School to advance to the Orange County championship game for the fourth time in five years. The Knights (17-1) will play St. Margaret’s on Wednesday at Newport Harbor High School for the OC championship.

“Our team is so deep. Every player player can shoot and score, so it’s nice to know that anyone can be the key player. The love on this team is incredible,” Stokes said.

After the Knights cruised through their first two post-season games by scores of 18-4 and 18-8, many thought that the no. 4 Eagles would at least slow down the Knights but that was not the case.

Katelyn Murphy gave the Santa Margarta faithful early but short-lived reason for optimism when she put the game’s first point on the board after 2:25 had passed in the first half. After that goal, the Eagles were shut out the rest of the half.

“We talked about this after the Newport Harbor game, it’s really just coming out and playing our game and not letting their game plan dictate how we play and just coming out strong,” Knights coach Cristina Johnson said.

Misfortune started to strike the Eagles when Murphy picked up her second yellow card, disqualifying her from the game. The Knights continued to control offensive possession and pressured the Eagles on defense to disrupt their offensive rhythm.

“I think our team came out ready, but they [Foothill] showed up ready to play from the get-go,” Eagles coach Katie McHugh said. “I think Murphy, one of our star players, getting yellow carded out of the game in the first half took a turn for us and our team feeds off of her momentum.”

Foothill led 14-1 until Molly Jacobson scored at the 17:43 mark of the second half to end Santa Margarita’s drought. But the deficit was too much for the Eagles to overcome.

Jacobson led Santa Margarita (16-4) with two goals while Murphy and Kaylee Harrison both scored once. Brogan Webster made nine saves for the Eagles.