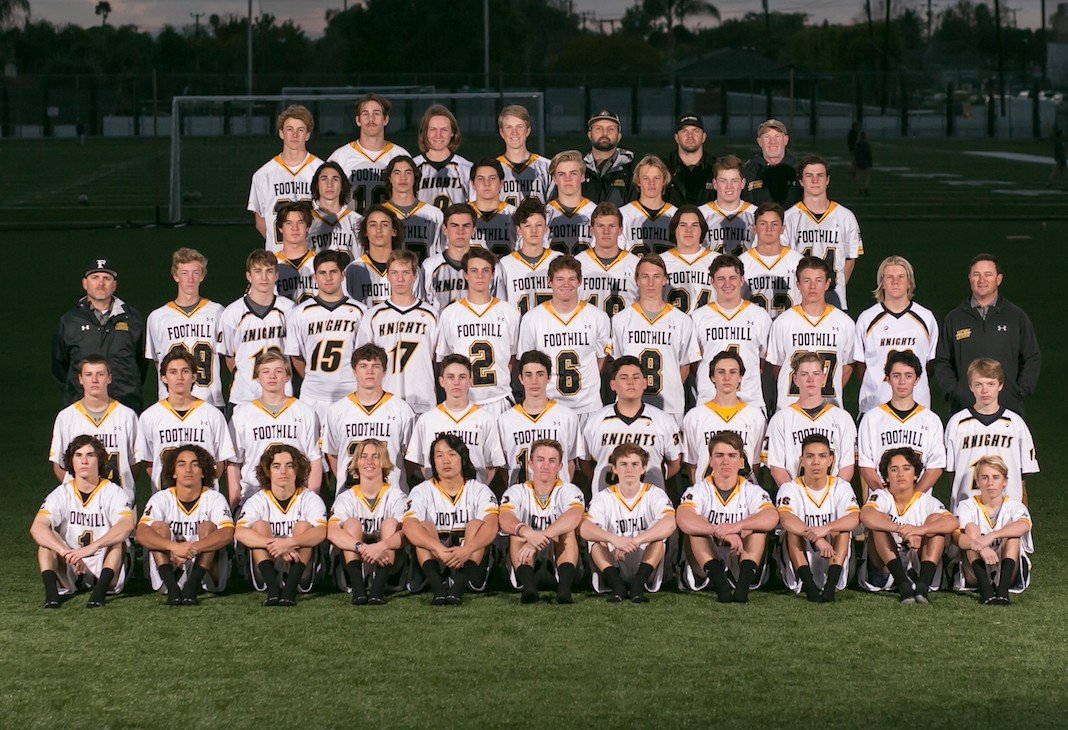 The visiting Trabuco Hills Mustangs put a scare into Foothill on a rainy Tuesday night game between two Top 10 Teams, but Foothill prevailed with a strong second-half effort.

The Mustangs jumped out to an early 2-0 lead with goals from Tyler Payne and Jared Friesen.  After Foothill responded with two of their own to tie the game, the Mustangs showed they were not going to be intimidated by tightening up the defense and rattling off four unanswered goals by halftime.   Solid defensive efforts from Max Wulterin, Justin Paget and Josh Burdette gave Trabuco a 6-2 lead with two minutes left in the half.

Seemingly on the verge of heading into the intermission with a comfortable lead, the Mustangs let the Knights back into the game with a series of mental errors. Foothill took advantage with their dynamic duo of faceoff specialists Michael Logan (Limestone) and Miles Smart (Ohio Wesleyan) controlling the dot (a combined 16/22). The extra possessions resulted in two goals by Ellis Geis who completed his hat trick for the night and a 6-4 Mustangs lead at the half.

Although the Mustangs hung tough in the second half, Foothill’s efficiency (27 groundballs and 17/20 on clears) took its toll and the Knights pulled away pulled away for a 12-8 victory.

Friesen, Payne, and AJ Switzer each netted a pair for the Mustangs.  Jason Kauo and Holden Evans added the other two.

The Mustangs host Brighton HS from Utah Friday night at 7pm. The Knights host Loomis Chaffee on Thursday in a game that will be live streamed by MaxLaxOC.com.