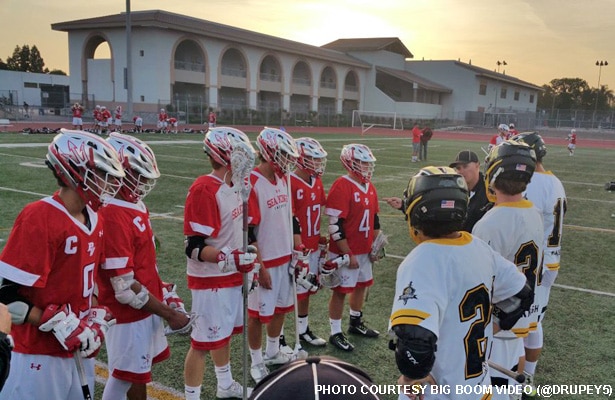 The Palos Verdes Sea Kings, ranked No. 1 in the US Lacrosse/MaxLaxLA coaches poll, became the first team from north of Orange County to beat the storied Foothill Knights, ranked No. 2 in the Orange County poll, holding off a furious rally for a 7-6 victory Thursday night in Tustin.

Palos Verdes, which won its 11th consecutive game, never trailed in the contest, but a late surge by the Knights (11-4) made for a tense final minute of play.

When PV senior Peter Henkhaus (Marquette) scored into an empty net while the Knights chased and double-teamed, the Sea Kings’ led 7-4 with 2:06 to play. But Foothill scored a minute later, then won the face-off and scored again within 14 seconds. Suddenly, it was a one-goal game with 51 seconds to play.

But Palos Verdes (11-2) won the final face-off — its 10th win in 16 draws — and was able to run out the clock (with help from a Foothill slashing penalty) on a historic victory. Since 2005 — the first year listed on LaxPower.com — no team from Los Angeles has beaten Foothill, which has won the Southern Section title six times.

The Sea Kings have reached the section title game five times but have never won, losing to Foothill in three of those championship games. In fact, no team from the north half of the Southern Section bracket has ever won the section title. Thursday, Palos Verdes took at least a small step toward the final breakthrough.

And as usual with the Sea Kings, the defense set the tone. Only one other team had limited Foothill to six goals this season, and that came in a loss — St. Ignatius (San Francisco) fell to Foothill 6-4. Three times the Knights had been held to eight goals, going 2-1 in those contests. But Palos Verdes stymied the Knights’ offense, limiting them to four goals until that quick, two-goal burst in the final minute.

Save statistics were unavailable late Thursday, but PV goalie Connor Jongewaard (Connecticut College) was strong in net, turning away numerous shots, including a point-blank stop in the fourth quarter when a Foothill attackman slipped inside and danced along the crease line before Jongewaard stuffed his low shot attempt.

With Jongwaard anchoring and LSM/D Jarrett Jones (Georgetown) and sophomore LSM/D Kyle McBride (St. John’s) grabbing ground balls — Jones had six and McBride three — the offense didn’t need to produce much. And it obliged, scoring only as much as was needed.

Henkhaus, who scored three goals to lead the Sea Kings, got things started, capping a patient Sea Kings possession with a goal for a 1-0 lead. Minutes later, Jones scored in transition on a feed from McBride for a 2-0 edge. Foothill finally got on the board with a man-up goal in the closing seconds of the first quarter, making it 2-1.

Austin Lowi (Jacksonville) fed Rizal Smith (Stevenson) to make it 3-1 Sea Kings, and Aidan Westley (MIT) fed Jake Nolls, who made it 4-1. After the Knights answered with one, Henkhaus scored his second. Foothill added one more before half, and Palos Verdes led 5-3 at the break.

Foothill scored the lone third-quarter goal, and the teams entered the fourth quarter with Palos Verdes clinging to a 5-4 lead. The Sea Kings had missed a couple of chances when risky transition passes missed their targets and became turnovers. Also aiding the Sea Kings’ cause were two crease violations that negated two potential Foothill goals.

The one-goal margin stood for the first four minutes of the quarter, but Palos Verdes finally broke through when Jones hit Smith in transition for Smith’s second goal and a 6-4 lead. It stayed that way until the 2:06 mark, when Foothill pulled its goalie and Henkhaus made the Knights pay, scoring into the empty net for a 7-4 lead.

Foothill scored twice more, but the comeback ended there. The win marked the second week in a row that Palos Verdes, unranked in the Inside Lacrosse West Region Top 10, has beaten a ranked opponent. Foothill was No. 6 this week, and De La Salle of Concord (Calif.) was No. 9 when PV beat the Spartans, on the road, 12-9.

Palos Verdes now must come back down to Earth by Saturday, when neighborhood and Bay League rival Peninsula visits. The No. 7 Panthers (8-3) have beaten the Sea Kings in each of the last two seasons, 5-4 in overtime last season and 7-6 in 2014.