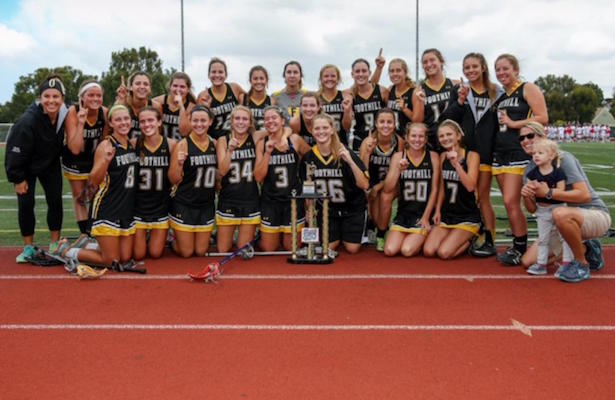 No. 3 Foothill earned a return trip to the Orange County championship game with a 5-1 victory over No. 10 Newport Harbor.  In doing so, Foothill ended the Sailors’ six game winning streak that included playoff upsets over No. 7 San Juan Hills and No. 2 St. Margaret’s.  Foothill will play Mater Dei in the County Championship game Wednesday at 5:00 pm at Trabuco Hills High School.  The game will be live streamed on MaxLaxOC.com.

While upsets are commonplace in the NCAA’s March Madness, such is not the case the OC’s May Madness.  Thus it was a big deal when Newport Harbor, a no. 10 seed, reached the Final Four.  And when Newport Harbor’s Katie Hendrix tied the game 1-1 midway through the first half, a third consecutive upset seemed within reach.  The Knights had other ideas though, and their combination of ball control, shutdown D, and Hannah Upshaw between the pipe was too much for the Sailors.  Foothill  put their depth on display, getting five goals from five different players.  Emma Groggin got the Knights started early in the first half when she converted a pass from Brie Ratkevich into a goal with a nice crease roll. Carly Escalette and Ava Brand added first half goals.  Meridien Lee and Ratkevich tallied in the second half to reach the final 5-1 score.

Foothill will now try to avenge a 12-9 April 28 loss to Mater Dei in a winner-takes-all championship game.