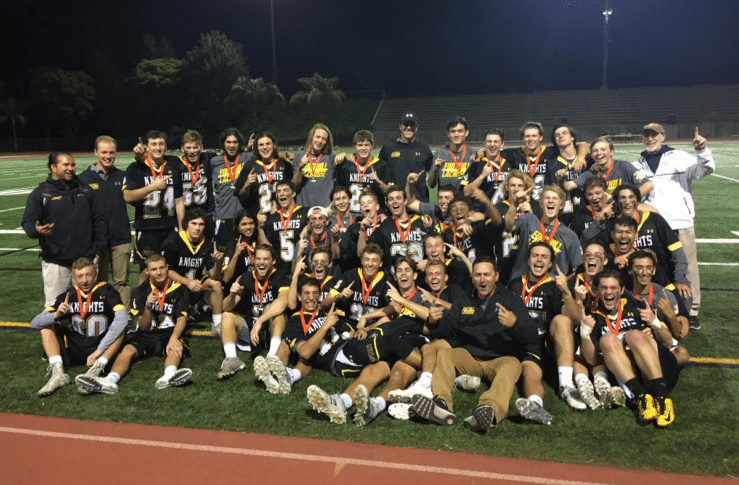 Irvine – The second meeting between the Corona Del Mar and Foothill boys’ lacrosse team went a lot different than the first time around. The Sea Kings beat the Knights 11-4 on March 18 at CdM, but on Thursday, at Irvine High, the Sea Kings saw a different Foothill team.

“It’s incredible. This game is not just for us, it’s for the seniors last year that left this field without a win and it’s for each other here, these guys are playing for each other. It’s been a tough season. A lot of losses, lot of experience and a lot of growth,” Foothill coach Jon Fox said.

The Sea Kings got their only lead of the game when Will Favreau put them on the board first late in the first quarter. After that goal, the Sea Kings were held scoreless until the fourth quarter.

Foothill took control of the game in the second quarter.  The Knight dominated possession and scored five goals to take a 5-1 lead into halftime.

Neither team scored in the third quarter, but a pivotal moment for Foothill came when the Knights were down two players. With plenty of time remaining in the game and the Sea Kings presented with an opportunity to to turn the momentum, goalie Austin Mann and the Foothill defense clamped down on the Sea Kings, preventing them from scoring.

“He (Mann) had an outstanding game today. I couldn’t have asked him to play better,” Cole Falbo of Foothill said.

“Our team really rallied together and our seniors came up big. They got me a lot of open looks on crease and I didn’t have to do too much,” Josh Fox said.

For the Sea Kings (18-3), Gokale, Fries and Favreau each scored while goalie Kyle Cord made 10 saves. CdM, which was held to its lowest scoring output this season, had only four shots in the first half.

“They played great. They played with a lot of energy. They were playing great defense, winning a lot of groundballs, possessing the ball themselves and finishing when they had opportunities,” Sea Kings Coach G.W. Mix said.

Foothill will look to add a seventh Southern Section championship to its collection when it , plays Loyola on Saturday. The Knights and Cubs played in the regular season with the Cubs winning 13-7 at Loyola on March 11.

“They [Loyola] are going to have to bring a heck of a game to say the least, because we’re on the top of our game,” Mann said.