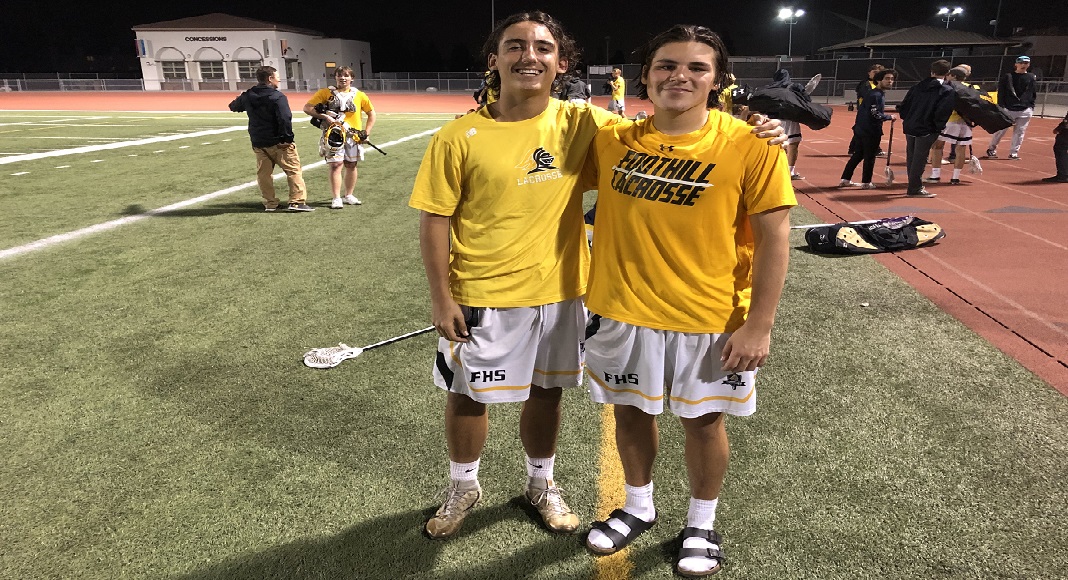 The #2 Foothill boys lacrosse team ground out a tough 12-10 win over #7 San Clemente  on Thursday at Tustin High School to advance to Saturday’s semi-final round of the OC/IE championship tournament. The Knights will play #3 Trabuco Hills on Saturday at 2:45 pm. The Mustangs edged Santa Margarita 6-5 in the other quarterfinal.

Troy Hofer (pictured right) led the Knights with four goals while Easton Babb (pictured left) had three goals including the go-ahead goal which broke a late 10-10 tie and proved to be the game winner.

“We were moving the ball well and the offense was flowing. I’m just trying to do the best I can for my team to win and we pulled through,” Babb said.

The first quarter established a pattern that both teams followed until the final whistle.  Each team took turns scoring, never letting the other build a comfortable lead. With the score tied at 3-3 in the first half, Hofer and Babb rattled off back-to-back goals to give the Knights a short-lived two-goal advantage. True to form, Luke Lemus scored late for the Tritons, cutting Foothill’s halftime lead to 5-4, and making it anybody’s game with 24 minutes left to play.

San Clemente came out strong in the second half and took its first lead at 6-5 courtesy of of back-to-back goals from William Nelson. With the Tritons holding on to a 7-6 lead, the Knights took the lead back at 8-7 with goals from Destry Burton and Hofer.

Flags go flying but Easton Babb battles through several hits to the head to put the Knights up 11-10 pic.twitter.com/Ad723zUnhy

The Tritons’ man-down unit successfully killed the penalty that was assessed on the Babb goal to keep San Clemente in the game.  Then a Foothill slashing penalty with 1:39 left to play, brought on the San Clemente man-up unit, and new hope for Tritons Nation. The Tritons threatened but Joey Garcia made one of his six saves to keep the Knights’ lead intact.

“He didn’t get fazed by a couple of goals going in at close range and he just stared that ball down and stepped to it. We’re really proud of his effort,” Knights coach Jon Fox said.

With less than a minute remaining, the Tritons got another chance to tie and send it into overtime, but Foothill knocked the ball loose and was able to recover. After the Knights recovered the ball, they eventually cleared it and wound the clock all the way down to zero, which sparked a joyous celebration from the Knights.

Nelson led San Clemente (10-9) with three goals while Lemus, Trevor Sutton and Jake Brannon each had two goals. Fallon added one goal for the Tritons, who got eight saves from Eugene Kang.

“The boys emptied the tank. We couldn’t have done anything better or worse. Two great teams battling and one team has to win,” Tritons coach Brendan Finnerty said.

Finnerty was proud of his team on how they battled all game against the Knights. The Tritons, the co-South Coast League champion, also overcame an 0-4 start to the season and the turning point, according to Finnerty, was when they beat Tesoro (the second time) and Trabuco Hills.

“After spring break, we came back and we had an opportunity to be co-champions with Trabuco in league and the boys were determined to make that happen,” Finnerty said. “It was a tough roller coaster ride. The boys are mentally tough, kept grinding and they did what they had to do at the end of the year to win a playoff game.”

Foothill, which has never missed the final four, plays Trabuco Hills on Saturday at Segerstrom High School. The Knights beat the Mustangs 12-6 on March 18, but Fox expects a battle.

“We got to have a strong faceoff and wing play and we got to finish our shots. It’s going to be another great game, we’re excited to get after it,” Fox said.