Foothill Boys Pull Away from Tesoro, Advance to Semis Saturday 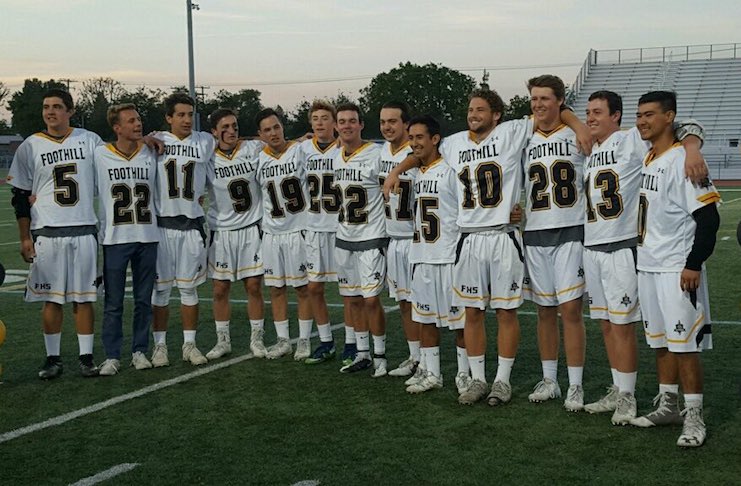 The No. 3 Foothill boys lacrosse team broke open a tight game with big second half to defeat No. 6 Tesoro 13-6 and advance to the County semi-finals. The Knights have advanced to at least this stage every year since the tournament began. They will try to advance beyond Semis Saturday for the first time since 2014 when they won the Southern Section Championship. San Clemente stands in the way.

Tied 2-2 after the first quarter, the Knights’ started to build up some momentum in the second quarter and built up a 5-2 lead by halftime. Ellis Geis, Wyatt Kayl, and Troy Hofer provided the Q2 goals. With George Dalis and Kenny Algeo leading a defense that was starting to buckle down, Austin Mann coming up with seven saves the three goals were plenty.

Led by Geis who had four goals including the gem below, the Knights kept the momentum rolling in the second half to seal the 13-6 victory. Seven different players scored and the team collected 32 groundballs to overwhelm the Titans.

Next up: Foothill will face San Clemente on Saturday. The Tritons edged the Knights by one goal earlier in the season.

The Titans end one of the most successful seasons in program history with a 13-4 record and the Sea View League championship. Their roster shows they will lose only three seniors to graduation. Tesoro will be early favorites for another Top 10 season next year.