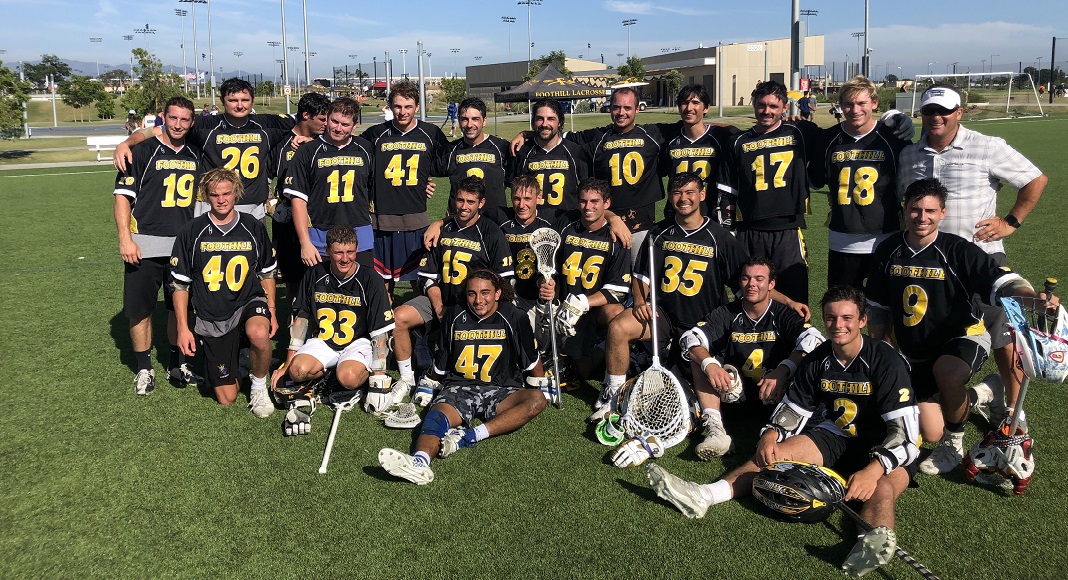 Some of the best Foothill boys lacrosse players from the past gathered on one team to participate in the TribzLacrosse California Showcase Open 19+ division this past weekend at Orange County Great Park. The Foothill Alumni finished second after falling short to SoCal Bulls 6-5 on Sunday in the championship match.

Despite the loss, Foothill coach Jon Fox was overall happy with how the alumni fared, considering his team faced players that were younger and quicker than some of his players.

“We were playing loose and relaxed, having fun. Michael Logan was outstanding at the faceoff X and we got some nice shots,” Fox said.

Logan (class of 2018), who completed his first year at Limestone College, was happy to be back playing lacrosse in a Foothill jersey. He said his favorite memory as a Knight was scoring in the Orange County championship game his senior year and hearing all of his friends and family cheer loudly from the stands.

“It’s a proper homecoming. It definitely feels good to be back in the Foothill jersey overall, so I really can’t explain the words and how it feels to don the black and gold,” Logan said.

Nate Marano (class of 2015), who is the boys lacrosse coach at Orange Lutheran and who played lacrosse at the University of Denver, also was glad to put on a Foothill jersey. Marano’s brother, Matt (class of 2015), was also in attendance for the Foothill alumni.

Marano’s favorite Foothill boys lacrosse memory was when Foothill won the county and Southern Section championship in 2014 – his junior year. Marano led the Knights in points with 111, helping them finish with a record of 21-1 and a No.1 ranking in the state and a No.2 ranking in the nation, according to MaxPreps.com.

As for the tournament, Foothill alumni won its first pool play game in thrilling fashion, beating Rip City 10-9 in a brave heart where at the end of regulation when the score is tied, one player from each team faces off against each other at the faceoff circle, with whoever scores first wins. The Knights trailed 9-6 at one point in the second half until they scored three straight goals, with the equalizer coming from Cooper Pickell (class of 2011).

In the brave heart, Logan squared off against Quentin Buchman, a 2018 graduate from Santa Margarita. Logan won the faceoff and attempted to win the game for Foothill, until Buchman was flagged for a pushing penalty.

After the penalty, Foothill was given another chance to score the game-winner and did so courtesy of Marano.

After the Knights beat TVL 11-3 in their second game on Saturday, they squeaked out a 6-5 victory over The Other Guys. The score was tied 4-4 until Logan gave them the lead for good with a coast-to-coast goal after the faceoff. Foothill then fell to Victory 10-5 in its fourth game in pool play.

Victory’s team consisted of graduates from St.Margaret’s, with recent gradaates such as Stu Pollard, Kevin Groeninger, Zane Handy and Koa Todd. Despite the loss, Foothill alumni won its pool and was off to the championship match.

Against SoCal Bulls, it was neck-and-neck, as both team kept trading goals. With the score tied at 4-4, SoCal Bulls rattled off two straight goals to lead 6-4 at one point.

Foothill scored one more goal to make the score 6-5 and eventually got off a shot before time expired. But the shot missed its mark and SoCal Bulls wound down the clock and won.

Despite the wins and losses, Fox said his team played loose and relaxed and had fun.

“It’s a lot of contributions from everybody. Just a team effort which is classic Foothill,” Fox said.

Fox hopes that the Foothill alumni can make a return next year and possibly beyond, as this was the first time Foothill Alumni entered in any sort of event.

“I hope this sets the stage for the future. This is our first time ever playing as a Foothill alumni at an event and it’s a win. The guys had a great time playing as well, so I’m looking forward to them connecting more in the future as well,” Fox said.

Foothill has won eight county championships, seven Southern Section championships and has amassed over 200 wins as a varsity program. With lacrosse being a CIF sanctioned sport, the Knights will look to add to their history.