Foothill Advances to Semfinals With Second Half Shut Out 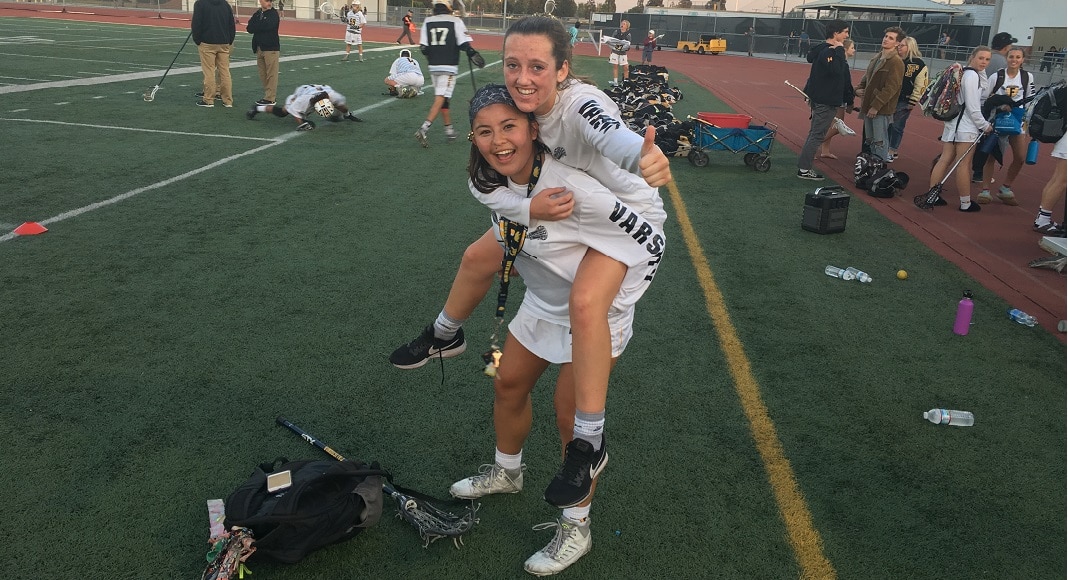 Behind seven goals from Ashley Stokes and a stingy second-half defense, the No.3 Foothill girls’ lacrosse team erased an 8-6 deficit and won 18-8 against No.6 Aliso Niguel on Thursday at Tustin High School.  The Knights advance to Saturday’s semifinal, where they will meet two-time reigning Southern Section Mater Dei on Saturday at Segerstrom High School at 2:45 p.m.

Against Aliso Niguel, Foothill had to dig its way out of a hole. The Wolverines surprised the Knights by jumping out to an early 6-2 lead.  The Knights began to reel the Wolverines back in with three straight goals and managed to pull to within 8-6 by halftime.

Coach Kate Hick let the Knights know during halftime what it would take if they wanted their season to continue.

After halftime, the Knights controlled the draws, turned up the defensive pressure and ran away with the game. Stokes got the train rolling with four straight goals to give them a 10-8 lead.

“She was the glue we were missing the last four games [against Tesoro, Mater Dei, St.Margaret’s and Torrey Pines], and to have her back, it’s just everything that works,” Hick said about Stokes, adding that this was only her second game back from a concussion she suffered on April 10 against Santa Margarita.

The lead kept growing with every draw control and turnover caused by the Knights, eventually leading them to their fourth straight semifinals appearance.  In an impressive defensive showing, Foothill held the Wolverines scoreless in the second half.

The Wolverines were led by Quinnlyn Mason who notched a hat trick while Kennedy Mason and Taylor Wedlock each scored twice. Sydney Stewart also added a goal for the Wolverines, which got six saves from Olivia Gilroy.

“I don’t think anything went wrong in the second half, I think it went right for Foothill. Foothill is an outstanding team and they’re well coached and we knew it was a long shot coming in. My girls showed the grit and  I don’t think they stopped showing the grit,” Wolverines coach Dave Elkins said. “These girls don’t quit. I love them to death. To come in third place [in the South Coast League], to not have the horses like Foothill does and to give them an 8-6 game in the first half and not quit even though they had 12 goals scored against them in the second half, I couldn’t be more proud of this team. ”

Elkins expressed pride in his team and noted that they achieved all the goals that they set when the season began.

“We set goals. We wanted to move up in our position in league, we wanted to make playoffs, we said we wanted to do better than last season and we [wanted to advance] to the second round. We accomplished that. We said we wanted to finish in the top 10, and we finished sixth, we got as high as fourth at one point. There wasn’t a single goal that we didn’t achieve,” Elkins said.

The Knights face Mater Dei for the third straight year in the postseason, except this time, it’ll be in the semifinals, not the finals. The Monarchs beat the Knights 14-6 on April 19 at Foothill High School.

“We can’t have a first half like we had tonight. We have to come out in the very beginning and play as hard as we did in the second half,” Hick said.