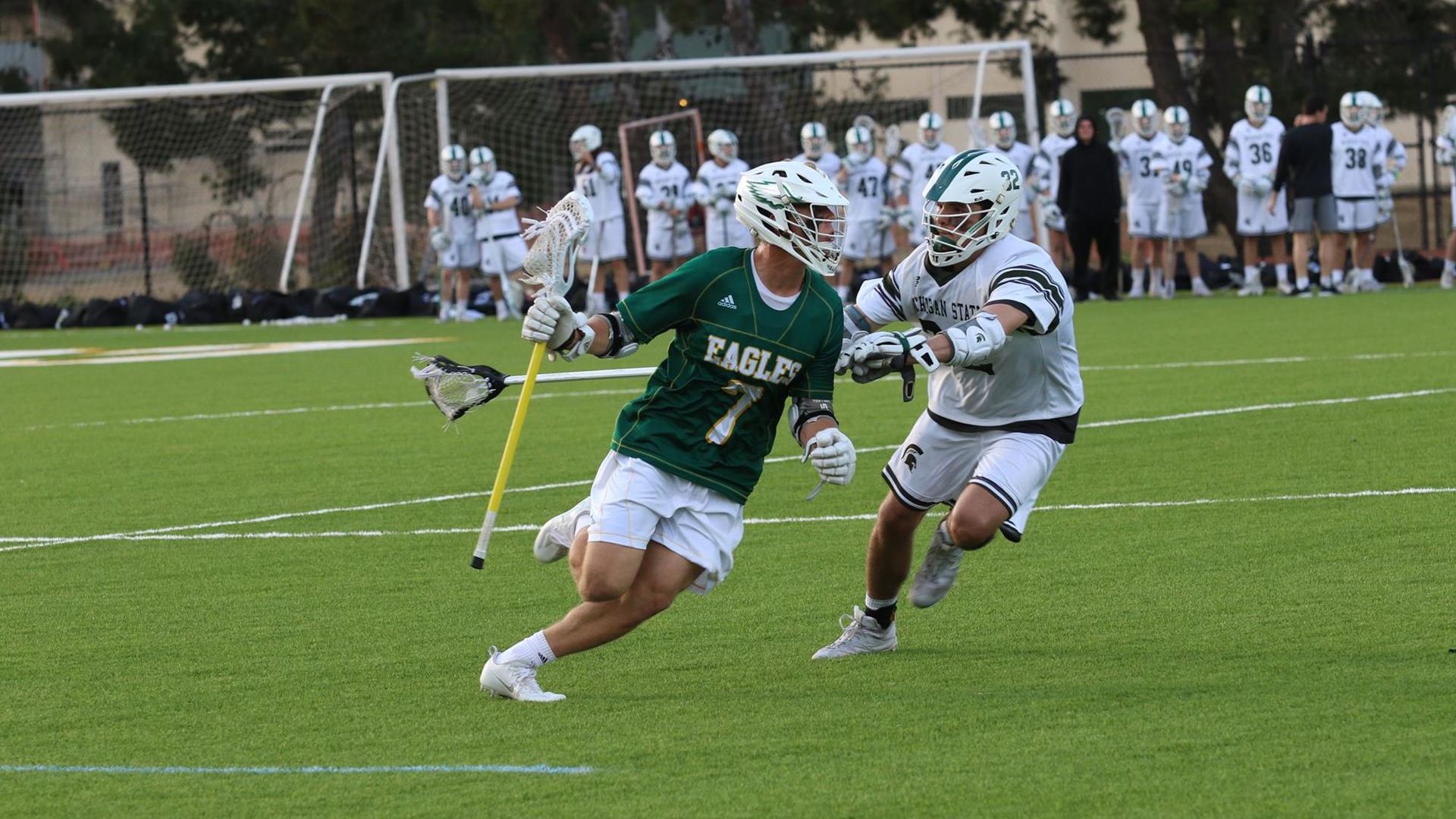 The No. 5 Concordia men’s lacrosse team rose to the challenge once again at Eagles Field, defeating No. 1 Michigan State on Tuesday by a final score of 12-10.

In a tense matchup, tagged as a “statement game” for the home team by MCLA pundits, the Eagles emerged victorious over the top-ranked Spartans, improving to 6-0 in 2019 and expanding their home winning streak to 11 games, dating back to last season.

The visitors took an early 2-0 lead in the first quarter. The two-goal advantage remained for Michigan State at 5-3 midway through the second quarter before three unanswered goals gave Concordia a 6-5 lead heading into halftime. The Spartans battled back to tie the contest at eight in the final seconds of the third quarter, and scored quickly in the fourth to lead 9-8, but the Eagle attack took command and outlasted the visitors in the final frame with a four-to-one run, sealing the 12-10 victory.

“I don’t think it was our cleanest game, but I’m really impressed with the fact that we got down (early) and we weren’t playing that great (at first), but we stayed composed,” said CUI head coach Jesse Foss. “We didn’t get down on each other, we stayed positive and stayed engaged. We were able to work our way out of it and this win will benefit us later in the season.”

Leading 11-10 with less than a minute to play in the fourth quarter, Lienhart combined with senior midfielder Logan Perry spectacularly for the contest’s final goal. After winding the shot clock down to 10 seconds following a timeout, Perry rushed in from the right wing through three defenders and flipped the ball across the face of goal to Lienhart. The junior attacker leaped up and slammed a volley into the top left corner to expand the lead to 12-10 and put the win on ice for the Eagles.

“It was huge, absolutely huge,” said Foss. “The kids did a great job. We were disciplined, we called timeout and we asked them to run (the shot clock) all the way down at the end. Logan Perry made an athletic play and Jackson finished with a great shot.”

Perry added, “You win or lose in those moments and we stayed calm and ran the play that coach told us to do.”

Concordia embarked on the 2019 season ranked 11th in the MCLA preseason poll. After climbing to No. 5 in the first round of weekly rankings and remaining there in the second, the Eagles look to ascend even further following Tuesday’s victory over the Spartans. The Green and Gold now boast three wins over ranked teams this season, with two of the three coming against top-three opposition.

“Obviously this is one of the best opponents we’ll play all season and it’s important that we fought hard and came away with it,” said Lienhart. “We just played together.”

The Eagles look to defend the nest and their perfect 6-0 record on Sunday, March 10 as they welcome the San Diego State Aztecs to Eagles Field at 3:00 pm.