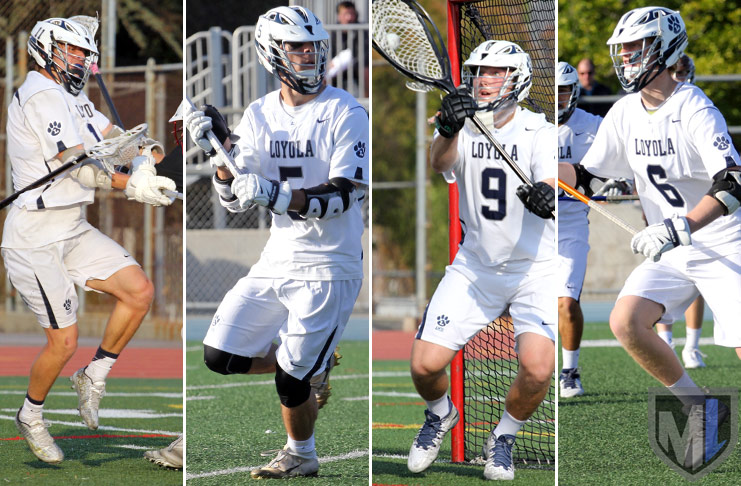 Last spring, Loyola became the first team from the Los Angeles-area to win the US Lacrosse Southern Section championship, beating Corona del Mar 10-6. The victory capped a 20-4 season in which the team continued to seek out challenges, playing at St. Margaret’s, at Foothill, at Monte Vista-Danville and at Torrey Pines.

The Cubs swept the Mission League, going 8-0; beat Palos Verdes in overtime (after losing to the Sea Kings in OT earlier) to win the LA title, the beat CDM to claim the Southern Section title.

“We had a great season last year, and we only graduated six seniors,” coach Seth Cohen wrote in an email. “We’ve got some new coaches, a ton of returning talent and some players ready to break out. Expectations are high, and the boys know there will be a target on their backs this year. We’re not shying away from that. We welcome the challenge.”

We graduated six seniors from last year’s team. Five of those players (Tommy Riley, Max Neblina, Mike Lira, JP Hatch and Sean Smith) earned all-league honors at one one point or another in their careers. All will be missed, but Sean Smith (two-time All-American, Mission League Player of the Year and three-time first-team All-League) will be hard to replace. A player with Sean’s work ethic, skill and poise doesn’t come along every day.

We have a lot of returning talent this year, as most of last year’s impact players were juniors. They’re seniors now, and they want to go out on top. We return our entire starting defense and goalie (need to replace our LSM), a dominant face-off specialist, five of our six top midfielders, and two out of three starting attackmen.

When you talk about key players for us, you have to mention Joe Theuer first. Joe, heading into his senior year, is already a two-time All-American, three-time first-team All-League and two-time team MVP. He is committed to Tufts, and we’re thrilled to have him between the pipes this year.

Nick Mohler returns to anchor an experienced defense. He’s a two-time first-team all-league player, committed to St. John’s. He’s long, rangy and has incredible stick skills. Niko Econn transferred into Loyola last year and had to sit out (per CIF rules) for 10 games. He came in midseason and really gave our team a boost. He plays with an aggressive, menacing style. At 6-foot-4, he covers a lot of space. Even with his limited action, he was able to earn second-team all-league honors. He is committed to Air Force, and we’re excited to have him play a full season for Loyola.

Our two top midfielders shared last year’s team offensive MVP award, and both have committed to top Division I programs. Jonathan Partamian is committed to Syracuse and earned All-American honors last year. He’s a downhill dodger with great speed and a strong shot. He plays a heady team game but has the ability to take over at anytime. Ryder Mora is committed to Maryland and is a first-team All-Area player, as well as being a two-time first-team all-league player. He’s smart and has great instincts. He excels on either end of the field, on the wing during face-offs, and is a matchup nightmare when he inverts. He’s another guy that could just take over at any time but prefers to play smart team ball.

Mason O’Hanlon had a breakout year last year. He earned first-team all-league honors at attack but is equally adept at midfield and played significant minutes at both. He’s aggressive and plays with incredible passion! Mason won the Offensive MVP award in the section championship game with his four-point (two goals, two assists) effort.

Aidan Hesse is the only junior to make this list. He’s a dominant face-off specialist who made his bones in last year’s championship game. Aidan finished his season with a 65 percent win rate. As a sophomore, he went up against a number of players headed to D-I programs and more than held his own. Look for him to be stronger, more poised and dominant this year.

Emmett Reilly battled injuries his sophomore year and was bit by the injury bug again toward the end of his junior year, but he still put up more than 25 points. His contributions on the first midfield line were sometimes overshadowed by Partamian and Mora, but with Emmett’s speed and shooting ability, look for him to have a breakout season. He’s hungry! Pat Casani and Joe Petersen both saw minutes last year and could be impact players this year.

Our attack probably has the most question marks. With Sean Smith graduating, how our attack plays together and who will see the majority of minutes is up in the air. Garrett Smith was a steady hand at attack last year, earning second-team all-league honors and nailing the go-ahead goal in our semifinal comeback against Harvard Westlake. With his increased size and speed, look for him to step up. Henry Hasenberg had some of our most dynamic goals last year. It seems like every shot this kid takes is behind-the-back, backhanded or through his legs. The thing is, he always seems to can it. He denies it, but we all believe he’s part Canadian. Look for Wes Priestley, with great vision and a slick stick, Dominick Trageser, with size and an ability to finish inside, and Griffin Cappelletti, with a strong left hand and a nose for the goal, to compete for a spot on the starting attack unit.

Morgan Lewis worked himself into the starting defense last year and never left. His tough, smart and steady play earned him second-team all-league honors. Will Kupiec played more minutes than any other freshman who made the team last year. This spark-plug LSM plays a physical style of lacrosse. He has some big shoes to fill with the graduation of (first-team all-league LSM) Tommy Riley and (second-team all-league LSM) Max Neblina, but the coaches have confidence in his ability. He’s playing football right now, but we’re sure he’ll be ready come lacrosse season.

We’re excited to announce that John David Whalen has been hired as the JV head coach. He played his high school ball at Boys Latin in Maryland and followed that up playing attack for Navy. John David coached for a year at Navy and has coached at a variety of levels in and around the L.A. area. His focus on teaching the fundamentals and instilling discipline should help shape an already strong program. Last year’s JV went undefeated, and word is we have another strong freshman class. There should be a lot of talent for him to work with.

Mike Gvozden returns to Loyola as an assistant coach on varsity. He moonlighted as a part-time coach for Loyola a couple of years ago while coaching the Loyola Marymount men’s club team. Mike served as head coach and head of lacrosse operations at Viewpoint School last year. He had a remarkable high school career in goal, earning All-American honors twice while at Severna Park high school in Maryland. He played his college ball at John’s Hopkins, winning a national championship in 2007. In addition to working with Loyola, Mike is also doing important work with City Lacrosse, introducing the game to inner city kids. We’re thrilled to have Mike back, coaching up our own All-American goalie, as well as a number of young goalies aspiring to fill his shoes.

The two new coaches are a welcome addition to a staff that includes Carl Mueller, a JV assistant who has been coaching at Loyola for five years; JD Johnson, a varsity assistant who played at Michigan and is a Loyola alum; and Brett Tietjen, a two-time Assistant Coach of the Year who is heading into his sixth season at Loyola, running the defense.