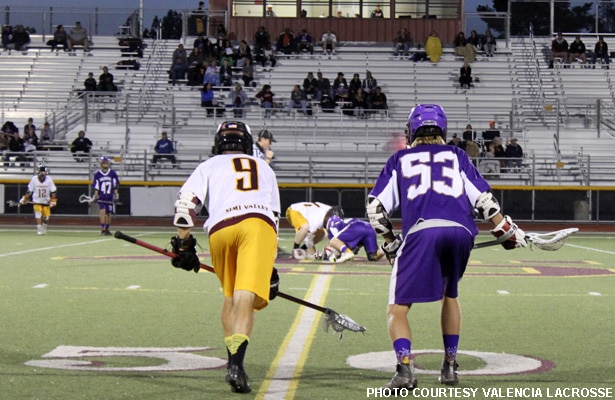 Valencia scored six unanswered goals in the first half to take a 6-2 lead over Simi Valley and cruised to a 10-6 victory Friday at Simi Valley HS.

Sophomore goalie Lucas Propst earned the team’s Player of the Game honors with seven saves. Junior captain Tim Wiggins anchored a Vikings defense that supported a comfortable lead throughout the night. Sophomore Zayne Martinez paved the way between the lines with strong defensive midfield play and four ground balls to complement many clears.

Freshman phenom Evan Dean continued his strong offensive output of late with two goals and an assist from the attack. Dean’s goals came six seconds apart early in the fourth quarter on nearly identical curls from the point off of fast breaks. The first-year player has put up nine goals and seven assists in four games since being moved from midfield to the offensive box.

The riding game proved lethal for the Vikings as they squashed 14 of 28 Pioneers clears. Junior attacker Brendan Barry led the way in that riding effort while also adding five ground balls, a goal and two assists. Other multiple-point scorers for Valencia were juniors Alan Lin and Donovan Bolanos with two goals each, sophomore Garrett Hixon with two goals and senior Dominic Vizcarra with two assists.

Valencia (5-7), which has won two in a row and three of its last four, continues its push for the playoffs next weekend, hosting Hart on Friday and Newbury Park on Saturday.