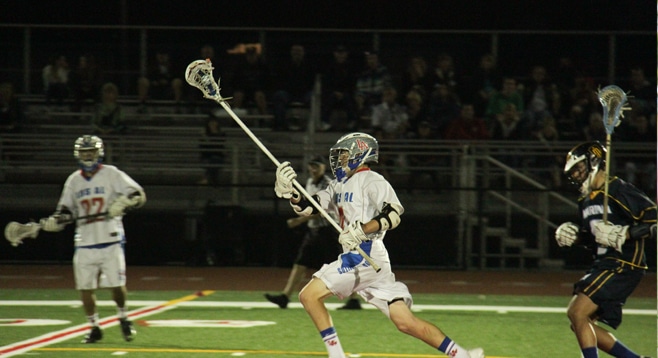 One of the first Daylight Savings games features brutal sun in the first quarter and a brutal end to the fourth quarter.

Los Alamitos started the game off with penalty in the first 10 seconds and was lucky enough to kill it. Unfortunately in their haste they squandered the opportunity trying to feed cross-crease and was intercepted and returned down field to David Arent who rolled through stick checks and finishes on the doorstop to make it 1-0 Marina. Joey Weinman would counter on a man-up opportunity for Los Al and finish on a well-executed wheel. On the ensuing possession Brandon Ezell quickly maked it two straight for Los Al getting his hands free for the high-to -high on the run.

A huge save by Jackson Browner kicked off the second half and started off the clear that Tyler Miller would eventually finish. The next man-up prove beneficial to Tyler’s twin brother Cody Miller that finished a cross-crease pass from Tyler to extend the Griffin’s lead 4-1.

An eight minute second quarter scoreless drought was ended by Arent to bring Marina within two 4-2. Los Al started to step on the gas and won the next faceoff that Ezell would finish sweeping across the top. Tyler Miller added to the lead breaking through a Marina double team.

Marina’s Arent completed his hat trick to potentially open up a second half comeback only to be cut short by a Tyler Miller feed to Patrick Baikie who dunked it over Marina’s keeper. Ezell helped seal the deal with four more goals bringing his game total to six.

With two minutes left and down eight, Marina started to get chippy. Los Al landed a big hit that was not called for a penalty although could have been in violation of the new “Defenseless player” rule and Marina retaliated with an aggressive body check to the back of the head of a Los Al clearing middie. Both parties were tangled up and thrown to the ground as refs scrambled to keep the field clear of incoming players. About eight players participated in the brawl. Luckily no one was hurt and the game was called early for good reason.

2. David Arent (Marina): Marina’s middie manned up and went to the rack for each of his three goals. He kept fighting to keep pace with Los Al.

3. Tyler Miller (Los Al): If Tyler wasn’t scoring the goal, he was involved in it some way. He’s smart and agile and is a player who can create for himself or the rest of his offense.