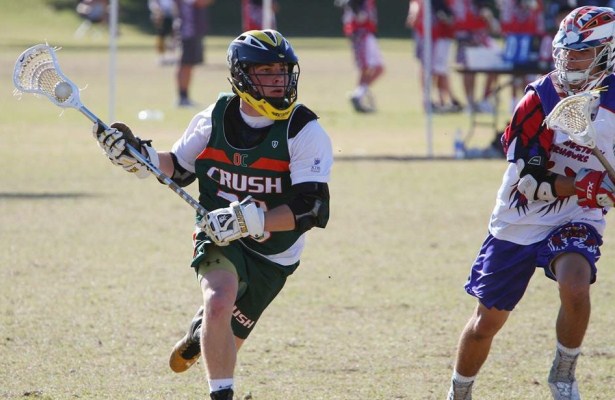 Cole has been on some of the best teams in Orange County, including OC Kings, OC Crush Elite and FCA Elite.  He had a season ending injury last year, but has fully recovered and is looking forward to competing for a second CIF championship for Foothill this year. Off-field, Fergus holds a 3.8 GPA and is very serious about his faith. He continuously strives for excellence and looks forward to attending Gordon College and experiencing all this great school has to offer.

We asked Cole if there is anyone he would like to acknowledge for helping him reach this milestone.  “I want to especially acknowledge Coach Fox for always being there for me, especially when I got my injury.  He helped me fight my way back and become the best lacrosse player I can be.”

Coach Fox has high hopes for Fergus at the next level, saying “Cole Fergus is a tremendous person and teammate. He loves to be on the field playing lacrosse.   He is best known for his relentless hustle and fiery competitiveness and ripped abs.  After having to sit out last season due to knee rehab he is more than ready to burst on the scene and make an impact for the knights this season.  His strong play, team first attitude and all out go for it attitude landed him the honor of wearing the #1 Warren Case jersey for this season.  Cole considered some big and small schools alike but after visiting Gordon, he found the right spot that can connect his strong faith, academics, and NCAA lacrosse. I think that playing under a strong character first role model like Coach Shumate at Gordon is a great opportunity for Cole to continue to be shaped into the person he wants to be.  I know he will represent the OC well and with a few more solid commits we will see the Gordon program make a real push to into the post season. ”

After watching Cole’s endless energy on the field playing for OC Crush in the Palm Desert Lacrosse Classic, we are excited to see what he has in store for us this season. Congratulations Cole Fergus!