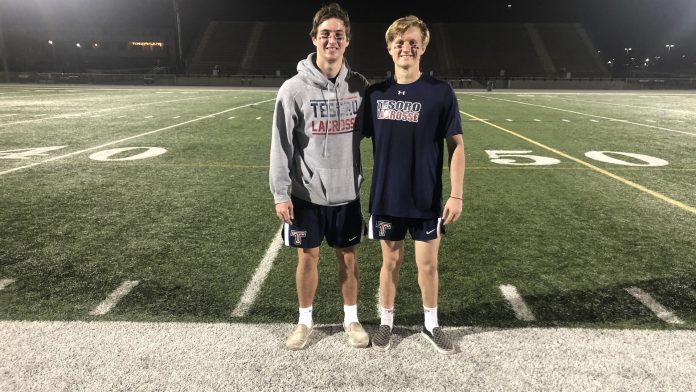 Aidan Farris (pictured right) scored the game-tying goal with 4:25 left in the game and then put the icing on the cake about two minutes with the go ahead goal to lift Tesoro to a 9-8 victory over Newport Harbor on Saturday. Tesoro goalie Jackson Brady made sealed the Tesoro W with two huge saves in the final minute and other one with about two minutes remaining in regulation.

Farris led the Titans with four goals and Cole Pollard (pictured left) added three goals. Charlie Richardson and Radyn Badraun each found the back of the net once for Tesoro, which got eight saves from Brady.

“Aidan Farris might be the best midfielder in Orange County. He probably gets covered by their [opponent’s] best long pole. We tried to get situations where he had a [short pole] on him. He can dodge, he can fake, he can do everything,” Titans coach Scott Grubert said.

After the Titans scored the game’s opening goal, the Sailors rattled off three straight goals from Luke Barnes, Troy Kennedy and Owen Brosnan. Tesoro wound up scoring two out of the last three goals of the quarter, including a goal with eight seconds left, and only trailed 4-3.

The Titans’ defense came alive in the second quarter, as it shut out Newport Harbor in the second half. Farris and Pollard each scored in the quarter and gave Tesoro a 5-4 halftime lead.

Grubert credited defender Liam Doody who was causing havoc defensively for the Titans, as he had six groundballs. Grubert also credited Troy Clapper, a first-year faceoff specialist, on his efforts at the X.

“We were man down a lot and Newport’s a great team. If you let them thrown the ball around, they’re going to score on you and that’s when we stepped up,” Grubert said.

The Sailors tied the game at 5-5 from a goal from a goal from Brosnan, but after almost seven minutes of neither team scoring, Pollard answered giving Tesoro the lead again at 6-5 at the 3:30 mark. 22 seconds later, Jonathan Chaix, a long stick middle, obtained the ball and scored, tying the game at 6-6 heading into the final frame.

Badraun gave the Titans a 7-6 lead 43 seconds into the fourth quarter. However, Brosnan one minute and 14 seconds to deliver the Newport Harbor reply that the lead was erased. Logan Atkins then put Newport Harbor back in the lead at 8-7. Unfortunately for the Sailors, it would be the Farris and Brady show for the rest of the game.

With less than two minutes to go, the Sailors got the ball and got a good look at the net, but it was saved by Brady, who eventually got the ball to an open teammate to try and chew up more clock. Newport Harbor tried to heave the ball down the field to either have the ball roll in the goal or get it to an open player on offense, but Brady was there to shut the opportunity down yet again, and the Titans celebrated a hard-fought road win.

“This is a tough place to win a game and we’re happy and fortunate we won. We need the effort we had tonight and we had against Corona Del Mar [going forward],” Grubert said.

Brosnan led the Sailors with three goals while Will Patterson, Atkins, Barnes, Kennedy and Chaix each had one goal. Jerome Snyder made 15 saves for the Sailors.

“They were pressing out on us pretty hard and they’ve got a lot of really really good athletes. Our defense is still doing really really well and our offense was starting to click. There was just a couple miscues here and there,” Sailors coach David Todd said.

Next up for Tesoro (4-2), a home game against Los Alamitos at 7 p.m. For Newport Harbor (3-5), it’ll look to get back into the win column on Wednesday at home against Yorba Linda.