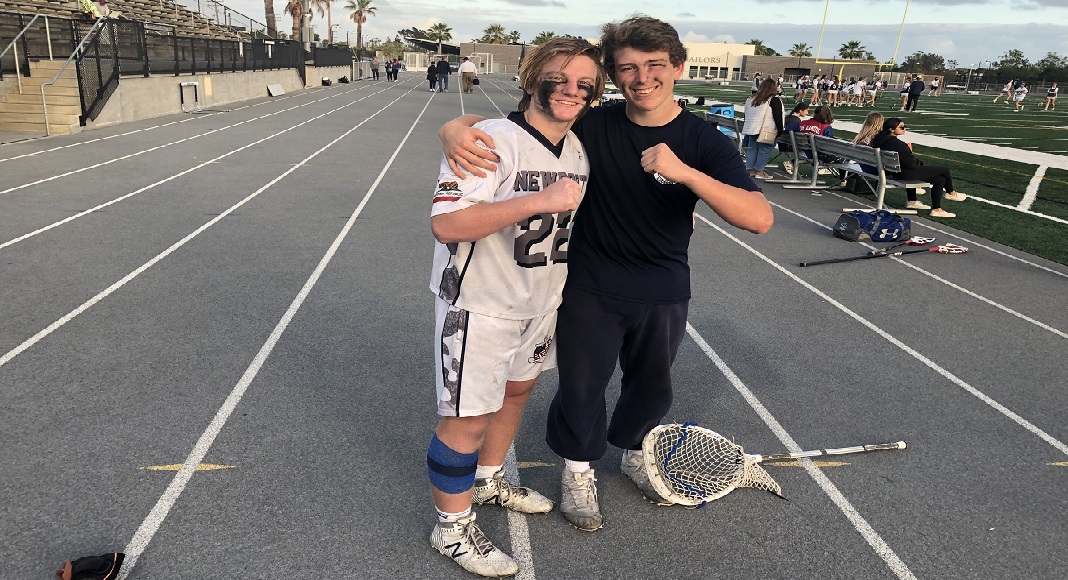 Rhett Farmer  scored the game-winning goal in overtime Tuesday, lifting No.8-seed Newport Harbor past No.9 Santiago 7-6 in the first round of the OC/IE Championship Tournament at Newport Harbor HS. The playoff win is the first for the Sailors since 2012 and the second under the guidance of coach Mark Todd.

In avenging their early-season loss to the Sharks, the Sailors (14-8) advanced to the quarterfinals, where they will play at No.1 St. Margaret’s on Thursday. The Tartans beat No.16 Beckman 13-9 in the first round.

“It [the game-winning goal] was huge,” said Farmer (pictured, left). “It feels amazing being only one of the only teams to actually have a postseason win, and we’re just trying to set a new personal record for the program, trying to get past the second round.”

Newport Harbor never trailed but didn’t enjoy more than a one-goal lead early on. Each time the Sailors scored a goal in the first quarter, Santiago was there to tie the game up. The teams were tied at 2-2 after the opening 12 minutes.

Neither team scored in the second quarter due to strong defense at both ends, but in the third quarter, the Sailors broke the ice on a goal from Hutton Wooters at the 6:41 mark of the quarter. The Sharks answered 25 seconds late, though, getting a goal from Caden DeWiggins.

That’s when the Sailors took charge, rattling off three consecutive goals, two coming from Aidan Goltz and one from Braydon Butler to take a 6-3 lead into the final quarter.

After a scoreless seven minutes in the fourth, Ryan Richardson pulled Santiago within two. Then the Sharks took advantage of the Sailors’ failure to clear and produced a goal from Jack Wolfe to cut the deficit to 6-5 at the 1:35 mark.

“Defensively, we shut them down in their six-on-six set,” Sharks coach Keith Parr said. “I thought my [team’s] defense played really well.”

George Grove scored the equalizer for Santiago with 38 seconds left, then got possession with 20 seconds left, and the Sharks called time out. Santiago nearly produced a repeat of their first meeting with Harbor, winning on a late goal in regulation. Unlike last time, though, Sailors goalie Garrett Rovazzini (pictured, right) made a save to force overtime.

Rovazzini had 14 saves for the Sailors.

In overtime, the Sharks won the face-off and got off two shots, but Rovazzini saved both. The Sailors pushed the ball up the field and found an open Farmer, who scored the game-winner. Afterword, his teammates swarmed him.

“They [Santiago] never say quit, and they’re gritty kids that have a really hard work ethic,” Todd said of Santiago. “I knew that our lead was not comfortable.”

Goltz and Wooters led the Sailors with two goals each, and Butler, Farmer and Bennett Cox each had one. Richardson led the Sharks with two goals, and DeWiggins, Grove, Wolfe and Aidan Koenig each scored one. Josh Cunningham made two saves for Santiago.

“Offensively, we had the looks,” Parr said. “I thought their goalie played outstanding. [If we could do] anything differently is actually put the ball in the back of the net.”

Parr was happy with how his team left it all out on the field. He was also proud of the Sharks’ accomplishments this season — winning the Big VIII League and beating quality teams such as Foothill and San Clemente.

“These players bought into what we were trying to do this year,” Parr said. “We’re a family; we’re all in, and I just asked them today, ‘The one thing you guys can do is just leave it on the field;’ and that’s what they did.”

The Sailors will play at St.Margaret’s on Thursday in the quarterfinals. The Tartans beat the Sailors 17-3 earlier in the year.