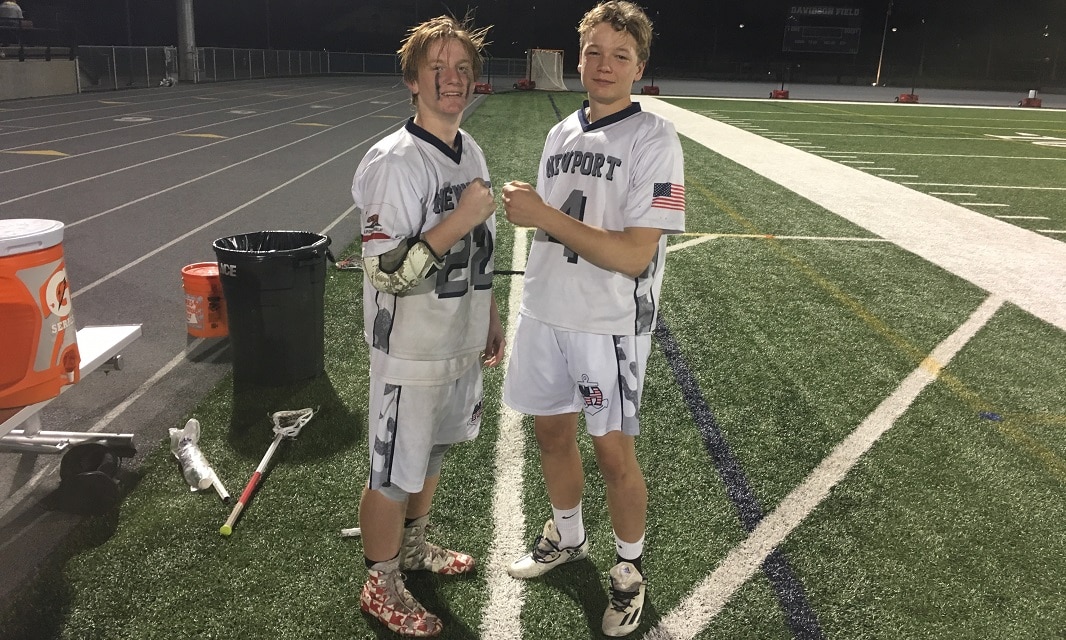 In a battle for mid-season supremacy of the Sunset League, Newport Harbor beat Los Alamitos 13-12 on Wednesday at Newport Harbor High School.  The Sailors were paced by sophomores Rhett Farmer and Aiden Goltz. Farmer finished with seven goals and Goltz had a hat trick including the game-winner with 1:19 left in regulation.

“Rhett’s got a lot of upside to him and so does Aiden; they both have high lacrosse IQ,” Newport Harbor coach Mark Todd said. “They [Los Alamitos] are very athletic, very well-coached and they’re talented. They’re so much better than what their record indicates. We’re very fortunate to get a win.”

Fittingly for a game that was neck-and-neck the entire way, including a 6-6 tie at halftime, the outcome wasn’t determined until the final whistle, when the Sailors batted down a desperation, full-field heave by Los Al to preserve the win.

Newport looked like it might pull away in the third quarter, building up an 11-8 lead by winning face-offs and getting Farmer good looks. The Sailors carried that 11-8 lead into the fourth quarter.

But like most Sunset League games, no lead is safe, and Los Alamitos opened the fourth with three unanswered goals to knot the score at 11-11. Lincoln Frazier scored the goal that pulled the Griffins even.

Joe Fuller responded for Newport Harbor to give the Sailors the lead again at 12-11. But Frazier, who scored the game-winning goal against Golden (Colo.), wasn’t done, tying the game at 12-12 at the 3:01 mark of the fourth quarter.

With the clock winding down and overtime seeming imminent, Goltz came through in the clutch at the 1:19 mark to put the Sailors back on top. Newport won the ensuing faceoff and drained most of the remaining time off the clock, but the Griffins forced a turnover with 4.9 seconds left. Their long pass from the back was batted down, though, giving the Sailors the victory and allowing their team to storm the field.

In addition to Farmer and Goltz’s scoring outputs, Fuller, Jared Rabin and Hunter Rouch chipped in one goal apiece, while Rabin had three assists. Garrett Rovazzini made eight saves for the Sailors.

For Los Alamitos, Ed Shean led the way with three goals and three assists while Frazier, Ethan Campos, Trenton Jones and Jack Doyle had two goals apiece. Julian Loe also scored for the Griffins, who got 10 saves from Cullen Murray.

A year after missing the playoffs, the Sailors (8-5, 4-0) have swept through the first half of league play and are all alone in first place. The Griffins (3-7, 2-1) are a game and a half behind them.

“Newport Harbor looked fired up; they definitely dominated the face-off and dominated the possession game,” Los Alamitos coach Tim Fox said. “After tonight’s game, every game from here on out is considered a playoff game if we want to move forward or if we want to try and have a shot at [the Sunset League title]. Just like I told the rest of the [team], you want the Sunset League championship, you got to win the rest of the games. We’ll see what Newport [Harbor] does.”

Both teams return to action on Friday. The Sailors kick off the second half of league play at Marina at 3 p.m. while the Griffins play at Thousand Oaks at 7:30 p.m.