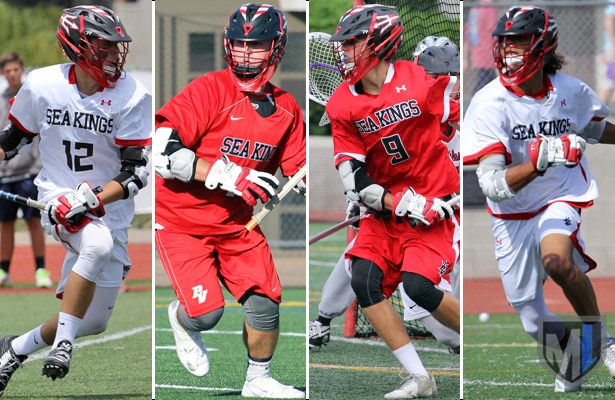 Coming off back-to-back championships in the U.S. Lacrosse Southern Section L.A. tournament, Palos Verdes returns what might be its strongest roster yet, with at least seven starters back from last spring — five of them committed to play in college.

But wait, there’s more … well, we’ll let head coach Jimmy Borell, who has guided PV to the L.A. title three times in his five seasons, tell you about it:

State of the program
“I am really excited about this team. We have a lot of good senior leadership. The team voted, and I named six captains this year (Jarrett Jones, Peter Henkhaus, Rizal Smith, Mikey Booth<, Aidan Westley and Shane Sharp, which is something I’ve never done — and probably won’t do again — but their teammates have supreme confidence in their leadership qualities, and so do I, so I felt it was the best thing for these well deserving young men, as well as the program. These guys are extremely hard workers, and I know they will do a great job!

“I think we will have a solid defense, which is important, since we will have a new goalie starting for the first time in three years. I really like our attack. They work very well together and have a lot of fun doing it. It reminds me of my 2012 attack that put up a lot of goals.”

Top Returners
“Lots of them! A couple of four-year varsity guys are finally seniors!”

Key Newcomers
“We will have two new faces at the goalie position — senior Connor Jongewaard (Connecticut) and sophomore JJ Barry — after three years of D McCann, and I am excited to watch them compete in practice.

“We’re looking for junior middie John Gressett to be an impact player, as well, this year. We have a very talented sophomore class — LSM Josh Park and middie Jake Nolls (the starting varsity quarterback, he shoots the ball 100 mph) both got some serious PT last year as freshmen.

“These four sophomores also saw some PT on varsity and are looking to build on that: Middie Beau Sabosky; attack Gage Rowland; defenseman Kyle McBride; and defenseman Hart Swan.”

Primary emphasis of fall ball
“We’re just training hard until we get our guys from football back in late November. We have some holes to fill with key guys like goalie D McCann, middies Stanny Gilbertson and Steven Delcarson and defensemen Graham Walker and Connor Markley gone. I’m looking forward to seeing some of the sophomores step into bigger roles and help out our upperclassmen.”