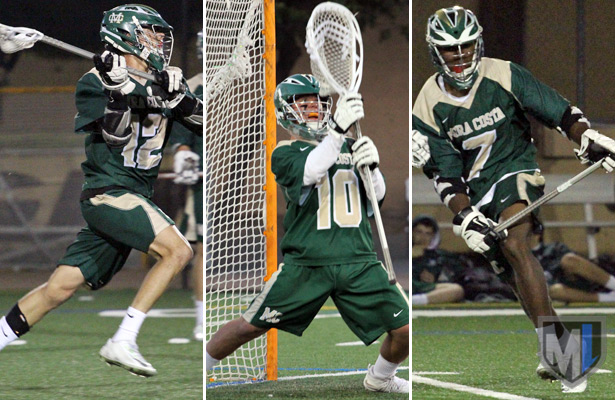 Last spring, the Mira Costa Mustangs posted the program’s first winning record since the glory days of 2011, when Costa won its second consecutive U.S. Lacrosse North Division championship. Since that season, though, they had gone 9-11, 6-8 and 7-8 in 2012-14.

So when Costa opened 2015 with seven consecutive wins — including a stirring 8-7 road win at Newport Harbor — it appeared the Mustangs were back. Well, almost. They lost seven of their last nine — including a 13-12, double-overtime loss to Peninsula and a 10-9 playoff loss at Thousand Oaks — to finish 9-7.

With a strong group of returning players — led by NCAA Division I commits Zane Crandall (Lafayette) and John Van Sickle (Drexel) — Costa should be in the hunt once again in 2016, coach Aaron Karsh‘s third season.

State of the program
“I like where we are at right now. We return a fair amount of our key contributors but have a lot of young talent that we are really excited about.”

Key newcomers
“We graduated eight seniors, so several players will need to step up. Casey Bonner, junior midfielder, I think is set for a big year, Ryan Gustafson, junior attack, will fill a big role; and Hayden Frye is a senior middie that I know will have a bigger role this season.”

Primary emphasis of fall ball
“Our emphasis is overall athlete development, a combination of lots of conditioning and team concepts. We are stressing the fundamentals now more than ever. We do some fun team events too — we will be taking the guys on a paintball adventure that they got a kick out of last year and are excited about doing again.”