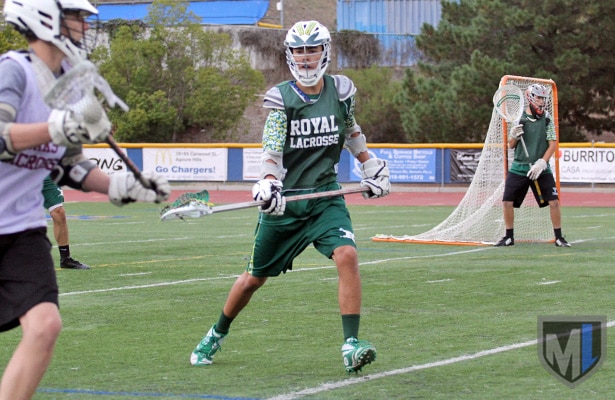 For years, lacrosse players from Simi Valley who wanted to play in high school had to look elsewhere. Until 2013, neither Simi Valley HS or Royal HS offered lacrosse, so top players often opted to attend neighboring schools.

So when both schools began CIF play in the 2013 season, they were in many respects starting from scratch. For Royal, that led to some serious growing pains, as the team won only eight games in its first three seasons. But coach Stu Sanderson says the future is looking much brighter for the Highlanders, who are playing in the LA Mavericks Fall League in advance of the 2016 season.

Here is Sanderson on the state of the Royal program after three seasons:

“Royal High School is entering its fourth season of boys lacrosse and has its first substantial class of freshmen this year born out of the Simi Valley youth lacrosse program. For years the youth program was leaking players to high school squads outside of Simi Valley because we lacked local options.

“Royal graduated nine seniors last year, most of whom only started playing lacrosse in high school. This season we’ll be heavy with upperclassmen and a crop of talented freshmen, including a goalie.

“We’re returning our offensive MVP, M/A Brandon Sattler (50-plus goals in two seasons) as a senior; our goalie Justin Harris (last year’s MVP) as a senior; and our starting line of athletic defensemen. We now have several players with substantial playing experience and a class of freshmen able to compete at the varsity level. This should bode well for us this season.