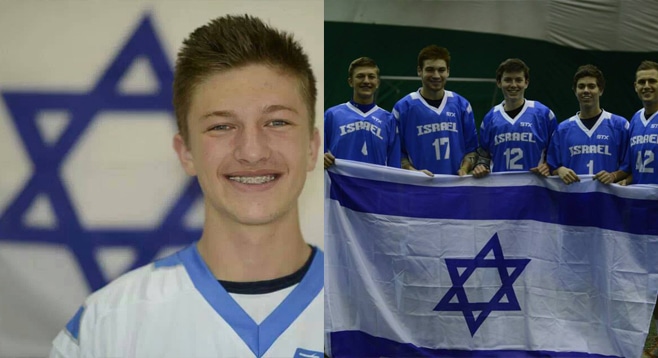 This past holiday season, Huntington Beach teenager Payton Fales scratched one item off the top of his bucket list:

Playing for a national lacrosse team in international competition. Fales, who will be a sophomore goalie at St. Margaret’s this spring, earned a spot on Israel’s U-19 National Team. That distinction gave him the opportunity to travel to Israel and Poland in December, step on the field of international play, explore his heritage, and help grow the game of lacrosse. Payton was kind enough to share his experience with MaxLaxOC.com and the OC lacrosse community in the following article:

Over winter break I was given an opportunity to travel to Israel, see its marvels, connect with my heritage, play in international games against the Polish and Latvian mens national teams,  and perhaps most importantly, grow the game of lacrosse. I was given the opportunity by Israel Lacrosse, an organization devoted to bringing lacrosse to Israel. There, I played goalie on its first ever U-19 National Team. The team shared a strong bond by the end of our time together, being that we had connections in religion and our passion for lacrosse. On the last day we were interviewed separately, and asked what our favorite part of the trip was; every person gave the same answer, teaching Israeli youth how to play lacrosse. On the third day of the trip our team was split into groups, and visited three different schools. My school visited Neve Tzion, an orthodox elementary school in Ashkelon, a city in the south of Israel, only three miles from the Gaza Strip.

Upon arriving, we set up our rage cages on the school’s basketball court, got on our pads, grabbed a few pinky balls and went into a five-on-five scrimmage. The bell rang just as the game began, and Israeli children began pouring out of their classrooms and onto the sidelines of the basketball court. For almost all of the kids, it was the first time they had ever seen anything close to a real lacrosse game, and in no time their screams of excitement rivaled those of Seahawk fans at CenturyLink Field. After fifteen minutes of scrimmage we broke the kids up into groups for drills, handed them sticks which my team had gotten donated before the trip (thank you to those in Orange County who helped me out and donated). Soon, every kid had his own stick, though it was not many when compared to the three-thousand pounds of equipment which my team and I flew to Israel with us. The excitement of the boys never died down and within an hour I was cornered by what seemed like thousands of Israeli boys begging for my autograph.

We left the school that day knowing that we had succeeded in our mission: to get the kids to develop an immediate love for lacrosse, the same way each member of my team did when we began playing so many years ago.

The sport of the lacrosse was introduced to Israel only two years ago, and the enthusiasm Israelis have shown for the sport is astounding. This summer Israel will have a men’s national team competing in the World Games in Denver.

If anyone has any desire to get involved with Israel Lacrosse, donate equipment, or learn more about playing lacrosse internationally please email me at paytonfales@gmail.com, or search Israel Lacrosse on Facebook.